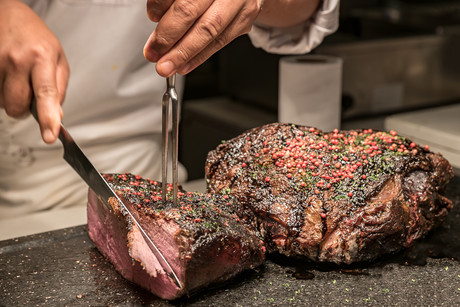 Findings from a New Zealand study reveal that three weekly servings of fresh, unprocessed red meat over eight weeks neither lowers nor raises heart disease in already at-risk men, with soy protein having equal effects on heart disease risk in this population group.

Fifty men aged between 35 and 55 years who were already at risk of heart disease participated in the study. The participants were randomly split into three groups, receiving three total servings (total 500 g) a week for eight weeks of either grass-fed Wagyu beef or a soy-based meat alternative. The participants had an otherwise normal diet, except for the inclusion of other red or processed meat, oily fish and omega-3 supplements to avoid confounding results.

Prior analysis by the research team of New Zealand pasture-raised Wagyu beef, from specially bred and fed cows, reveals that it has a notably different fat profile to grain-fed beef. It is rich in a fat called conjugated linoleic acid, or CLA, and other so-called ‘good’ fats including omega-3 fats. Pasture-raised Wagyu beef also contained on average less than half the saturated fat in ribeye, striploin and tenderloin cuts compared to grain-fed beef.

A diet heavy in saturated fats raises risk of cholesterol and heart disease, while CLA and omega-3 are anti-inflammatory and help protect against heart disease. Through the study, researchers wanted to determine if the fats in Wagyu beef could reduce risk of heart disease when eaten in moderation, with findings revealing that all three food conditions had the same neutral effect on heart disease risk.

Bloom sample analyses showed reduced levels of ‘bad’ LDL cholesterol and total cholesterol, and of fatty acids circulating in the blood across all participants. Participants also experienced drops in total body fat percentage and waist circumference. However, specific biomarkers for heart disease risk normally used in research, such as the density and size of LDL cholesterol particles, remained unchanged.

Consuming 500 g a week — the recommended level of intake by dietary guidelines in New Zealand and Australia, and by the World Cancer Research Fund — did not have a detrimental effect on heart health over the study’s eight-week period.

“A couple of things may have been at play in our study: often, just being in a dietary study makes people eat healthier because they’re thinking more about what they’re eating and they know they’re being watched. Also, because they had to exclude other red meat, including processed meat like sausages and ham, their diet during the study may have been different from their normal diet, and some of the foods they stopped eating may have partly led to some of the observed changes,” Dr Milan said.

Most of the evidence linking red meat to an increased risk for heart disease and colon cancer comes from large population or ‘epidemiological’ studies that identify patterns between people’s self-reported diet and their health status years later. These studies are subject to errors in people’s recall of what they ate, and do not consider the influence of other diet and lifestyle factors, nor the effects of fresh versus processed meat.