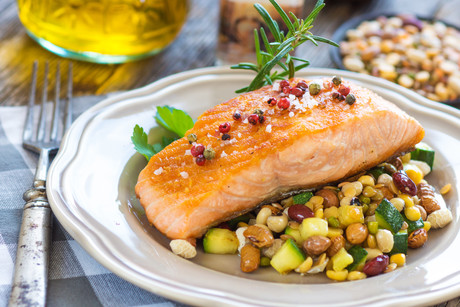 Diet and pregnancy have long been linked, with women often seeking advice about which foods can boost their fertility. Research in the Journal of Clinical Endocrinology & Metabolism found that seafood should be the go-to food for couples looking to increase their libido and their chances of conception.

Fish contain important nutrients such as omega-3 fatty acids, but fears of the high mercury levels mean many women avoid it when trying to fall pregnant. However, seafood may lead to couples having sex more often and quicker pregnancies, and it may also improve heart health, boost memory and reduce childhood aggression.

Researchers from the Harvard TH Chan School of Public Health asked 501 couples to keep a diary recording their daily seafood intake and sexual activity for one year.

"Our study found that couples who consume more than two servings of seafood per week while trying to get pregnant had a significantly higher frequency of sexual intercourse and shorter time to pregnancy," said researcher Audrey Gaskins.

The study found 92% of couples who ate seafood more than twice a week became pregnant, compared with 79% of those ate less seafood.

However, the researchers noted there are a number of other factors that may influence the association between seafood consumption and faster time to pregnancy, including more frequent sex, semen quality in men and ovulation or embryo quality in women.

They also highlighted the importance of both partners following a seafood-rich diet.

"Our results stress the importance of not only female, but also male diet on time to pregnancy and suggests that both partners should be incorporating more seafood into their diets for the maximum fertility benefit," Gaskins said.

Couples in which both partners ate more than 8 servings of seafood every month had 22% greater sexual activity and increased their time to pregnancy by 61%.