Would you eat a maggot sausage?

“An overpopulated world is going to struggle to find enough protein unless people are willing to open their minds, and stomachs, to a much broader notion of food,” Professor Hoffman said.

“Would you eat a commercial sausage made from maggots?

“What about other insect larvae and even whole insects like locusts?

Professor Hoffman said studies had shown that Western consumers who were willing to try insects in pre-prepared food recoiled from the idea of eating or preparing insect-based meals themselves, unless the insects were processed and disguised.

“In other words, insect protein needs to be incorporated into existing food products as an ingredient.

“For example, one of my students has created a very tasty insect ice-cream.” 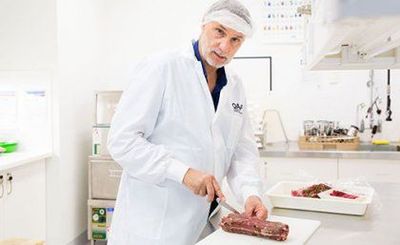 Professor Hoffman’s Queensland Alliance for Agriculture and Food Innovation (QAAFI) research involves the use of larvae (maggots) from the black soldier fly (Hermetia illucens) as a protein source for chicken production.

“Poultry is a massive industry worldwide and the industry is under pressure to find alternative proteins that are more sustainable, ethical and green than the grain crops currently being used,” he said.

He and his collaborators have found that broiler chicken diets that include up to 15% larvae meal don’t compromise chicken production performance, nutrient-use efficiency, breast meat aroma, flavour, juiciness and tenderness, or long-chain fatty acid composition.

“It’s all pretty logical if you think about it,” he said.

“Chickens in the wild don’t eat feed preparations. They eat insects and larvae.

”And, while insects are largely foreign as a food in Western cultures, for many millions of people around the world they are a familiar part of the diet.”

Professor Louwrens said insect larvae could be produced as a product from ‘upcycled waste’ including sewage.

“There needs to be a better understanding of the difference between animal feed and human food, and a global reappraisal of what can constitute healthy, nutritional and safe food for all.”