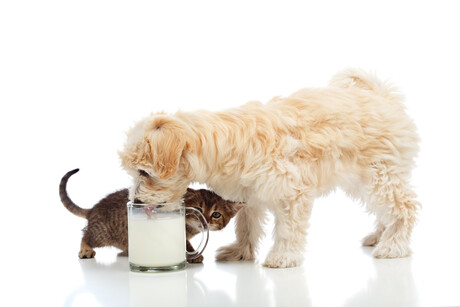 Researchers have found that milk oligosaccharide, a supplement which is on trend for infant formulas, may be beneficial for cats and dogs when added to pet diets.

The University of Illinois research provides a better understanding of how milk meets the nutritional needs of newborn kittens and puppies, and how it helps promote gut immunity and establish a healthy gut microbial community early in life.

Human milk oligosaccharide has been a trend in infant formula in recent years as studies have shown the complex carbohydrate supplements mimic human breast milk and act like prebiotics.

However, the research has previously not been extended to pet products despite milk oligosaccharides occurring in all mammals.

“When we first looked into this, there had only been one study on milk oligosaccharides in dogs, and none in domestic cats. The closest were really small studies on a single lion and a single clouded leopard,” said Kelly Swanson, the Kraft Heinz Company Endowed Professor in Human Nutrition in the Department of Animal Sciences and the Division of Nutritional Sciences at Illinois.

“Our study was the first robust characterisation of dog and cat milk oligosaccharides,” he said.

Feline milk was much more complex and balanced, with approximately 15 structures making up 90% of total oligosaccharides. Of these, difucosyllactose-N-hexaose b, 3'-sialyllactose and lacto-N-neohexaose represented more than 10% each.

Swanson said that even though domestic dogs and cats both evolved as carnivores, they are metabolically distinct in many ways.

“Although pet cats still exist as true carnivores, pet dogs are omnivorous in nature,” he said.

“These new milk oligosaccharide data highlight another interesting difference between the species, justifying further research to reveal their role in the nutritional and health status of newborn puppies and kittens.”

Even before Swanson and his colleagues identified the oligosaccharides in cat and dog milk, the pet food industry was beginning to recognise the potential benefits of these compounds as supplements in pet foods. In 2019, Swiss biotech company Gnubiotics Sciences announced an animal milk oligosaccharide-like product known as GNU100, but it hadn’t been tested in animals.

In two separate studies, both published in the Journal of Animal Science, Swanson and his team determined the safety, palatability and digestibility of GNU100 in dogs and cats.

First, in vitro laboratory tests with cellular colonies showed no toxic effects or tendencies to cause cell mutation. There was no reason to expect toxicity, but the result satisfies one of the basic US food regulatory requirements for inclusion of any new ingredient in pet foods.

Next, the researchers mixed GNU100 at 1% with a fat source and coated commercial dry diets for cats or dogs. As a control, fat-coated diets without GNU100 were also offered. When animals got to choose between the control and 1% bowls, they preferred the GNU100.

“In the cats, it was a huge preference. They ate nearly 18 times more food with GNU100 than the control food. We had just been hoping they wouldn’t reject it. You know, cats can be pretty finicky,” Swanson said.

“When we got the data back it was like, wow, they really love that stuff. And the dogs did, too.”

Swanson explained that GNU100 is composed of a complex mixture of oligosaccharides and peptides, small protein-containing compounds that may make the food more appetising to cats and dogs.

Finally, the researchers included GNU100 in experimental diets at 0%, 0.5%, 1% and 1.5% and fed them to healthy adult dogs and cats for six months. During that time, they measured stool quality, blood metabolites and nutrient digestibility, and evaluated changes in gut metabolites and the gut microbial community.

Overall, cats and dogs did well with GNU100, with no adverse health effects. The researchers found shifts in the gut microbiome towards more beneficial species and their metabolite profiles.

Aside from the palatability test, changes associated with GNU100 were as expected, showing intriguing trends in gut microbiota and gut metabolites that Gnubiotics plans to explore in future studies.

Swanson said the research team would have seen bigger benefits in a more targeted study focusing on newborn cats and dogs, geriatrics or pets with compromised immune systems.