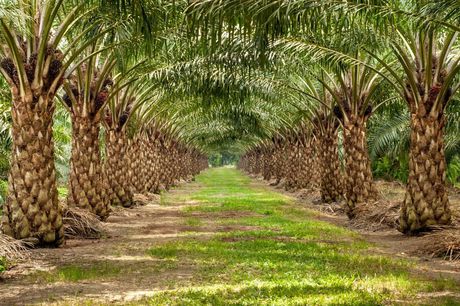 Oil palm fruit and seeds are the source of nearly half of the worldwide supply of edible vegetable oil and provide one of the most promising sources of biofuel. However, over the last three decades hundreds of thousands of fledgling oil palm plants at elite corporate plantations in Malaysia and elsewhere in Southeast Asia have failed. These failures have cost untold millions in spoilage and have had adverse implications for the tropical environment. According to an international team of genetic sleuths, the cause is bad karma.

In the 1980s, a much ballyhooed new method of generating plantations brimming with clones of the highest-yielding specimens of the oil palm plant met with unanticipated disaster. Corporate investors were astonished to observe that the finest hybrids, cloned in culture dishes, often grew into barren adults bearing desiccated, worthless fruits. These plants displayed a mutant form that scientists called 'mantled'.

It takes oil palms about six years to grow to maturity. Thus, the fate of promising nurslings is not clear until long after an investment of land and time has been made. When they're growing well, the trees are valuable.

Given the immense and still growing world demand for palm oil, it has been in industry's interest to increase yield. Helping in this effort have been plant geneticists. Cold Spring Harbor Laboratory (CSHL) Professor Robert A Martienssen, FRS, is one plant geneticist who has taken a keen interest in the challenge of boosting yield.

“Our work in this area has been driven in part by environmental concerns," Martienssen said. “As we devise ways to reliably boost yields, we thereby lessen the economic motivation to spread oil palm holdings into sensitive rainforest areas that are important to preserve." In past work, Martienssen has been instrumental in identifying a gene called SHELL that controls fruit yield.

The solution to the mystery of the 'mantled' oil palm and a demonstration of a way of preventing it has been published online in Nature. It comes down to a question of karma, according to Martienssen, along with Meilina Ong Abdullah, lead author of the paper, and her colleagues at the Malaysian Palm Oil Board (MPOB), the entity empowered to oversee that nation's world-leading oil palm industry, and researchers at Orion Genomics, a private US firm that spun out of CSHL (co-founded by Martienssen).

Mantled plants have their origins in tissue grafted from prize oil palm hybrids, grown in culture dishes. Tissue samples are derived from what gourmets would call the “heart of palm" — the growing tip of the palm plant, bearing its stem cells. In this way, the best yielders can be cloned — something that can't be done when growing the next generation from seeds.

Martienssen suspected that the field in which he specialised would provide a path to understanding what went wrong in some of those culture dishes, leading to mantled oil palms. His expertise is epigenetics — an array of molecular mechanisms whose actions modify the expression of genes without altering the sequence of the DNA 'letters' that 'spell out' the genes.

One very common epigenetic mechanism is called methylation. The addition or removal of methyl groups (CH3) from the DNA double helix within a given gene and areas near it can result in that gene's expression being enhanced, reduced or even prevented altogether. Using a microarray revealing methylation across the genome of several commercially important cloned varieties of oil palm, Martienssen and colleagues were able to spot a single genomic location where the absence of a methyl 'tag' corresponded with a version of a gene previously linked to mantled plants.

Imagine planting prized hybrid nurslings in year one, only to discover when the plants mature 6 years later that their fruits are worthless. That's the 'mantled' dilemma facing oil palm growers. Scientists have discovered the genetic secret behind the transformation of oil palm plants bearing normal fruit (far left column) to plants bearing desiccated, worthless 'mantled' fruit (far right column). A simple genetic test will enable growers to cull mutated plants at the beginning of the process, while they are still in culture dishes. Credit: Martienssen Lab, CSHL

The gene in question is the oil palm equivalent of a gene called DEFICIENS in the snapdragon plant, where it was first described. The team renamed the gene MANTLED in oil palm. The gene helps determine the fate of sexual organs, and when mutated can cause male organs to develop instead as female organs. Within MANTLED in oil palm is lodged a retrotransposon. It is one of myriad genomic invaders that lay (mostly) dormant within genes in all forms of life. This particular invader, or one very similar to it, was first spotted in rice plants, and had been named karma.

Martienssen and colleagues discovered that in mantled plants, a methyl mark present in healthy plants was missing at a location in the karma retrotransposon called a splice site. Karma sits within an intron in MANTLED. When the splice site is unmethylated, the gene does not use the normal exon to splice the intron, but instead uses karma. The RNA message copied from the gene encodes a mutant protein that gives rise to plants with worthless fruit. The team playfully dubbed this faulty gene message 'bad karma'. In trees that develop normally and yield healthy fruits, the methyl mark is always present at the karma splice site, giving rise to a version of the correct gene message, which the team naturally calls 'good karma'.

The team is not sure why 'bad karma' happens when oil palm tissue is cloned in culture. Martienssen suspects it has something to do with the temporary separation of plant tissue from its place of origin, the stem-cell containing meristem. Meristems also contain small RNAs that help guide methyl marks and other epigenetic signals to appropriate positions along the double helix.

A simple epigenetic test, analogous to inexpensive tests currently in use during pregnancy to detect a panel of human diseases in foetuses, will readily identify bad karma and thus enable growers to cull damaged clones at the plantlet stage. This will save vast sums of money, and importantly, says Martienssen, will be a boon to yield since it will promote the propagation of healthy high-value hybrid clones and thus reduce the economic pressure on growers large and small to devote additional land to generate more fruit.

Advances made over the last two years in oil palm genetics have the effect of significantly raising yields, providing an incentive for growers to plant 'smarter' rather than more extensively to obtain a given quantity of product. Here, a line in the forest, in Borneo, shows where the rainforest (left side) gives way to oil palm plantings (right). Credit: Martienssen Lab, CSHL