The science of scent for flavour in food 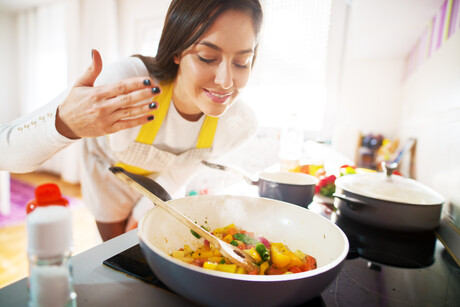 Flavour is the name of the game for scientists who want to optimise food for consumption in ways that improve nutrition or combat obesity.

But there is more to flavour than the substances that meet the mouth. Olfaction, our sense of smell, is a major contributor to how we perceive aromas, especially those related to what we eat.

With hopes to capitalise on the smell factor in flavour development, researchers are exploring how the route an aroma takes to get to the olfactory system, through the nose or the back of the throat, influences our response to the scent in question.

When study participants were asked to match a known scent such as rose with one of four unknown scents, they did best when the aromas were introduced in the same way, either through sniffing them in a vial or drinking them in a solution — an expected result.

The scientists were surprised to find, however, that participants were also better at matching aromas when the reference scent — the one that they were going to try to find a match for — was not labelled with its familiar name. The less they knew about the reference aroma, the higher their chances of correctly identifying a match — a finding that suggests aroma detection involves learning, memory and cognitive strategy.

The team eventually wants to consider other factors that could influence the perception of aromas and flavours, such as genetics and our microbiomes, the communities of microbes living in our nasal passages and oral cavities.

“A better understanding of these mechanisms could give us another way to modulate flavours and to modulate food-related experiences,” said Christopher Simons, associate professor of food science and technology at The Ohio State University and senior author of the study.

“It’s really hard to understand what people experience, and I don’t have access to your brain to see exactly what you’re perceiving. But if there are ways to influence that perception, maybe that’s a way to get people to eat healthier.”

The study is published in the September 2021 issue of the journal Physiology and Behavior.

Simons and colleagues were testing the theory known as the duality of smell, which suggests that how we perceive what we’re smelling depends on which path it takes to get to the olfactory system.

The 34 participants would first either sniff or drink the reference scent, which was labelled with its common name – the choices were rose, lavender, honeysuckle or jasmine — its Latin name, or a generic label that gave no information. They then sampled the same unnamed four floral scents — either through the same sense-of-smell pathway or its opposite — with the goal of finding the match to the reference aroma.

When the routes of delivery differed, participants made more mistakes, meaning there was something about those delivery systems to the nose that altered their ability to recognise similar scents — further supporting the duality of smell hypothesis.

But the finding that no information was better than a clear scent name was unexpected — and also suggests that this is where cognitive activity comes into play.

“If I say ‘rose,’ there’s information that will affect the way one processes and smells those aromas. When there’s no identifying information, what you have to do is profile — smell it and find something distinguishing about that particular aroma. That’s much harder than knowing what you’re looking for,” Simons said.

“We think there’s cognitive interference from the language centres that impacts how people do this matching and searching test… Fundamentally, the fact you have exactly the same stimulus that activates exactly the same receptors, and you can’t make a match — that’s fascinating.”

Simons is interested in repeating this kind of test with unpleasant aromas to see if the theory holds up, and also hopes to conduct experiments that could reveal whether our genetic makeup or the array of microbes and enzymes in our noses and mouths hold secrets to why the duality of smell exists in the first place.

This work was supported by state and federal funds appropriated to Ohio State’s Ohio Agricultural Research and Development Center. Co-authors Mackenzie Hannum and Jenna Fryer were students in Simons’ lab.

Scientists think the slush that is produced during the early stages of winemaking could be a...