Swallowing risk with beverage can pull-tabs

Three decades ago, a study revealed that beverage can pull-tabs were being swallowed by children, prompting a switch by beverage manufacturers to stay-tabs. However, a study presented at the annual meeting of the Radiological Society of North America (RSNA) has found that the new tabs are still potentially unsafe.

"One of the driving factors leading the change in beverage can construction was to eliminate inadvertent swallowing of the pull-tab and potential related injury to the gastrointestinal tract," said the study's lead author, Lane F Donnelly, MD, radiologist-in-chief and director of biodiagnostics at Cincinnati Children's Hospital Medical Center. "Our findings raise the possibility that the redesign of beverage cans may not have reduced the number of ingestions."

In 1975, amid already growing concerns that removable beverage can pull-tabs posed a litter problem, as well as a potential injury hazard if stepped on, a study in the Journal of the American Medical Association revealed two cases of accidental ingestion and one case of aspiration of pull-tabs that had been dropped back into the cans. As a result, US beverage can manufacturers refitted cans with stay-tabs that remained attached to the can after opening. However, these tabs could still be removed with little effort.

Dr Donnelly identified 19 cases of inadvertent stay-tab ingestion at Cincinnati Children's Hospital Medical Center over a 16-year period from 1993 to 2009. The mean age of the children who had swallowed the tabs was 8.5. Only four of the children were younger than age 5. Most of the cases were teenagers.

"It is unusual that the majority cases occurred among teenagers, since foreign body ingestion typically occurs in infants and toddlers," Dr Donnelly said.

While most of the 19 cases in the study were resolved without surgery, ingestion of foreign bodies, particularly those with sharp edges, can lead to injury of the gastrointestinal tract. Some cases do require surgery.

Confounding the problem is that stay-tabs are difficult to see on X-rays. While 19 ingestions were witnessed or self-reported, only four (21%) of the 19 ingested stay-tabs were visible on X-rays. In each visible case, the tab was located in the stomach. 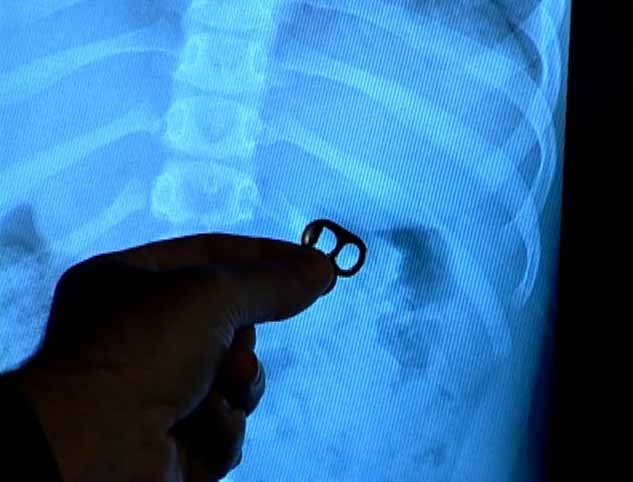 An X-ray of a child who had swallowed a stay-tab - a stay-tab is held next to the X-ray for comparison.

"Clinicians and radiologists should be aware that this does occur," Dr Donnelly said. "Not seeing the tab on the X-ray does not mean it was not swallowed."

The findings of the study question the current construction of beverage cans in the US and indicate that the tabs still pose a potential danger to children and adolescents.

"The identification of 19 ingested stay-tabs at a single children's hospital suggests that such occurrences are not uncommon," Dr Donnelly said.