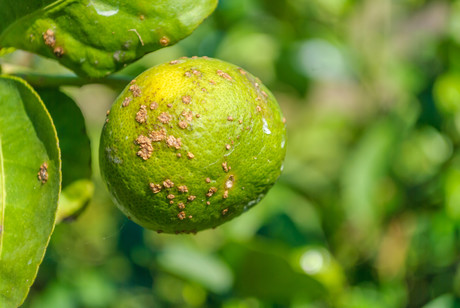 Biosecurity officers have intercepted a number of fruit items that tested positive for the citrus canker pathogen at Australia’s border. The items included limes, dried citrus peel and whole citrus fruit, and were intercepted on separate occasions. They were all confirmed to be carrying the citrus canker pathogen, and were declared and destroyed to ensure the biosecurity risks were managed.

“This is an example of the significant biosecurity risks that Australia faces and why it is so important to follow our biosecurity conditions. Back in 2004 a citrus canker outbreak had a major impact on our million-dollar citrus industry, and the disease has also caused extensive production losses in citrus industries overseas. These recent interceptions are particularly concerning given there is an ongoing national response plan in place to manage previous detections of citrus canker in Northern Territory and Western Australia,” said Lyn O’Connell, Head of Biosecurity.

Over the past year, over 12,000 citrus items that could have posed a serious risk were intercepted at Australia’s international airports. Travellers must correctly declare biosecurity risk material when travelling or importing to Australia; not doing so could incur prosecution or fines. Travellers visiting Australia could also have their visas cancelled.

“While Australia’s biosecurity officers and detector dogs do a great job, this is a valuable reminder that we need everyone to do their part and not bring or send prohibited items to Australia,” said O’Connell.

For more information on items that should not be brought to Australia, visit agriculture.gov.au/travelling.

Help us to help you, plead nurses and midwives

Yokogawa to supply DCS for power plant in Turkmenistan