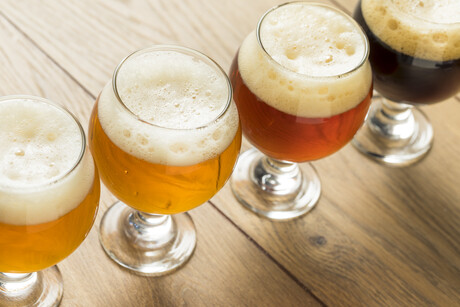 Penn State sensory researchers have found that, although most beer consumers can distinguish between bitter tastes in beer, this does not appear to influence which beer they like. Consumers just like beer, regardless of the source of bitterness.

Researchers conducted multiple studies with more than 150 beer drinkers to see if they could differentiate bitterants in beer. However, the question of whether humans can discriminate between types of bitterness remains controversial according to researcher John Hayes, associate professor of food science.

“Given that countless craft breweries around the country have been very successful in selling a near-endless variety of India pale ales — better known as IPAs — we wanted to move past testing bitter chemicals in water to see if consumers could differentiate different bitters in a real food such as beer,” said Hayes.

To determine beer drinkers’ ability to distinguish between bitter chemicals, study participants in blind taste tests were given commercially available non-alcoholic beer containing hop extract Isolone, quinine (the ingredient that makes tonic water bitter) and sucrose octaacetate, a food additive so bitter it has been used as a nail-biting and thumb-sucking deterrent. Participants, about half men and half women, primarily in their 30s, participated in three experiments.

The first experiment saw participants asked to rate the amount of bitterness and other beer flavour attributes in samples using an intensity scale, to ensure the beer samples were equally bitter. The second experiment asked participants to rate how samples differed from a reference on a seven-point scale. Then, to understand how each sample differed from others, participants checked attributes on a list of 13 descriptors to describe the samples.

In the final experiment, participants tasted the beer samples, rated how much they liked each sample and provided a forced-choice ranking for best-liked to worst-liked.

According to Hayes, most participants were able to discern differences in bitterness — even though the samples had been matched for bitterness intensity. However, results showed that, despite being able to differentiate between the different bitter chemicals, participants were unable to verbally describe these differences, even when provided with a list of attributes. Furthermore, researchers found no consistent effect on liking or preference; the source of bitterness did not influence which beers the participants liked.

In the sampled beers, researchers attempted to match the flavour profile of a pale ale-style beer, in which bitterness is accepted and desired by consumers. Lead researcher Molly Higgins explained that regular beer consumers were recruited because they are more likely to be aware of the various flavour profiles of beer and respond positively to the bitter qualities of samples during testing.

“What we found was unsurprising in hindsight — beer consumers simply like beer. So, it seems that for consumers who drink IPAs, a beer just needs to have a bitter profile. For them, it’s about bitterness in general, not the specific bitter quality — if it’s there, they will like it,” said Higgins.

This finding could help in quality assurance at breweries, as beer consumers could be more forgiving than previously believed when it comes to small variations across batches. Higgins noted that some breweries employ trained expert tasters to evaluate each batch. If these experts detect any off notes or flaws in the final product, the entire batch may be discarded.

“When breweries can establish an acceptable range for sensory attributes for their final products, they can make better decisions about how much variation is tolerable,” said Higgins.

Higgins adds that there are many segments of beer consumers, with a unique subgroup within the craft beer market devoted to IPAs. Those beer drinkers, Higgins explained, pick up more of the finer bitter notes created by novel blends of hops, and are willing to try many different types of beers.

The study, published in Nutrients, was part of a larger research project conducted by Higgins at Penn State University. Because of its sensory complexity and wide acceptance by many consumers, Higgins states that beer is a good model food to explore the capacity of people to perceive bitter taste.