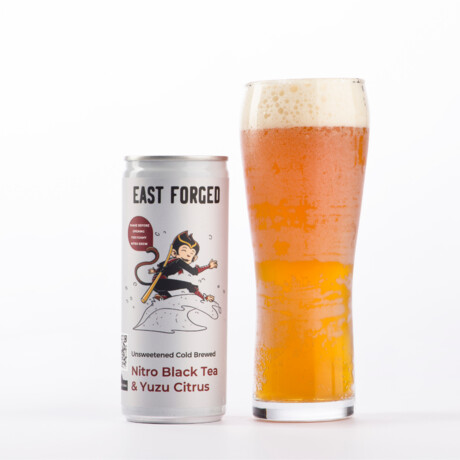 Looking like a beer when hard-poured, the cold brews are becoming noticed in the non-alcoholic adult beverage category. And with a low sugar content (less than 0.3 g of sugar per can) combined with the pure leaf tea, the drink is also gaining appeal in the health and lifestyle categories.

The founders of the brand — Kym Cooper and Tania Stacey — have backgrounds in the tea industry. Stacey previously won the World Tea Brewing Championship (Australia), and together they decided that they wanted to bring a new category to tea.

Covering the three biggest tea pillars — green, black and white — the brand has been launched with interesting flavour combinations of Pitaya, Calamansi and Yuzu.

East Forged brews have also recently won the duo gold and silver medals at The Global Spirit Masters in the Lo/No Alcohol category, taking their total award wins to a five medals in the last 12 months.

During much of the last year, the founders were forced to work in separate states due to the impacts of the pandemic. With the brand’s black tea grown in Queensland before being shipped south to be ‘forged’ onsite at an independent craft brewery in Sydney, Cooper and Stacey are a COVID success story as well as a tea-riffic example of innovation in an age-old category.