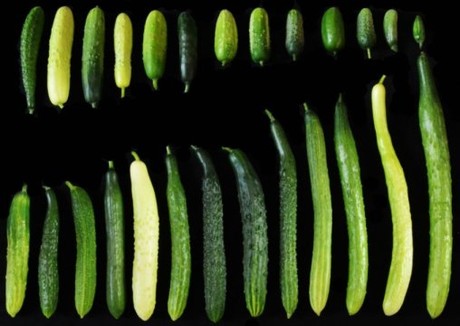 The size of a cucumber is one of the key factors for determining a good crop yield and market price. As the picture shows, different cucumber cultivars show a wide variation in mature fruit length.

Led by Xiaolan Zhang, the research team analysed 150 cucumber lines with different fruit lengths. They identified two variants of a gene named CsFUL1 that differed by a single base pair in the DNA code. The CsFUL1A variant appeared in long-fruited East Asian cucumbers, whereas the CsFUL1C variant was randomly distributed in wild and semi-wild cucumber populations.

This research has singled out a key modulator of fruit length and sets the stage for developing strategies to manipulate fruit length in cucumber breeding.

The first author of the research paper, Jianyu Zhao, said the next step was to work on other fruit. “We aim to identify the upstream regulators of CsFUL1A in fruit length variation in cucumber and to dissect the relationship between CsFUL1A and other fruit length genes.”

The research paper can be viewed here.