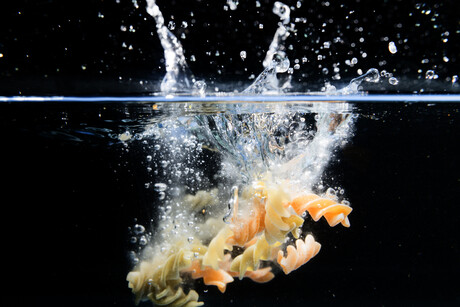 A new study has identified a simple mechanism for converting 2D structures into 3D forms — a development that could potentially reduce waste from plastic packaging.

The findings demonstrate how pasta, for example, could be stored in a flattened form that occupies less space, springing into its familiar twisted shapes once it is cooked in boiling water.

To help ease reliance on plastic packaging, researchers have previously proposed designing foods that can be flat-packed during transportation and storage, later taking on 3D shapes during preparation.

While surface grooves have been explored as a technique to morph flour-based foods, with some degree of success, this previous research had not yet revealed a reliable design to precisely yield specific shapes on demand.

To explore this mechanism, Ye Tao and colleagues conducted simulations based on a polymeric gel model, then an edible pasta model, finding that they could accurately predict morphing in both materials.

Next, the researchers demonstrated the mechanism and its ability to morph food by creating simple surface grooves in semolina flour dough while preparing an authentic Italian pasta recipe. The pasta swelled when they cooked it in boiling water, assuming 3D shapes based on the positioning of the grooves.

Tao et al. modelled this swelling process, observing that the morphing caused by the surface grooves was temporary and reversible.

Further experiments confirmed that the specific parameters of the grooves, including side angle, gap, width and depth, are critical for determining how the pasta morphs into different 3D forms. The authors note that these grooves can easily be made through inexpensive manufacturing methods such as stamping, laser etching, or moulding and casting.

The study has been published in Science Advances; for more information, visit https://advances.sciencemag.org/content/7/19/eabf4098.full.

Scientists have found that the body has the ability to detect whether a sweetener will contribute...

Diagnostic test for schistosomiasis on the horizon

Chromatography scale-up: don't get tied down by bed height

Key aspects to consider when purchasing a UVC disinfection system