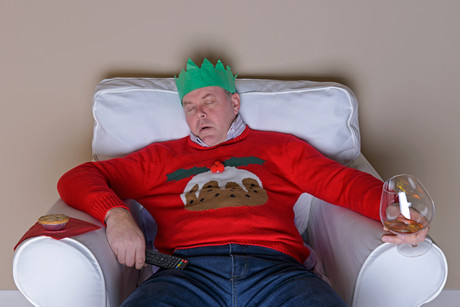 It’s the holiday season when large meals and long naps are the norm. Now you don’t have to be concerned that your desire for a post-prandial nap is presaging a dire medical problem — it is a direct result of the large meal that preceded the sleepiness. Well, researchers have established that this is true for fruit flies anyway.

Researchers from The Scripps Research Institute (TSRI), Florida Atlantic University and Bowling Green State University, calling this desire for a post-prandial nap the ‘food coma phenomenon’, wanted to establish firstly that ‘food coma’ is a genuine physical condition and then why some people fall asleep immediately after eating, some later and some not at all.

The researchers created a system called the Activity Recording CAFE (ARC), a small plastic chamber that allowed them to record Drosophila fly activity before and after feeding. After a meal, flies increased sleep for a short period before returning to a normal state of wakefulness. Their response varied according to food intake — flies that ate more also slept more. Further investigation of specific food components showed that while protein, salt and the amount eaten promoted sleep, sugar had no effect.

So, if your physiology is similar to a fruit fly and you want to nap immediately after the meal, you should go for high protein. This could be a good way to avoid having to talk to Aunty Rosie…

If, however, you want to participate in the political argument with Cousin Eddie, perhaps you should eat a high-sugar meal. The sugar high will see you through the crucial 20–40 minutes when you’d normally need to nap.

The research has been published in the online journal eLife.

Wishing all FoodProcessing readers a happy and safe holiday season. Have a good nap because next year will be very busy.