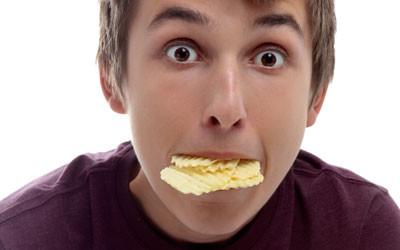 Researchers have developed a method to analyse the physical characteristics of the four stages of eating a potato chip — from the first bite to the final swallow — to help formulate a tastier low-fat snack. The results of the research have been reported in the Journal of Agricultural and Food Chemistry.

While munching on low-fat potato chips might reduce the guilt compared with full-fat versions, many people don’t find the texture as appealing. Cutting fat in potato chips usually involves reducing the vegetable oil content but it’s the oil that helps give the product its characteristic crunch, taste and mouthfeel.

Texture perception is conceptualised as an emergent cognitive response to food characteristics that comprise several physical and chemical properties. When food scientists formulate a new low-fat chip, they often rely on trained sensory panellists to tell them how well the new snack simulates the full-fat version. This process can be expensive, time-consuming and often subjective, since perceptions can vary based on factors like a person’s saliva flow rate and composition.

While at PepsiCo, Stefan Baier — now at Motif Ingredients — and Professor Jason Stokes’ team at the University of Queensland wanted to develop a more objective method to analyse the physical characteristics of a potato chip at four stages of simulated eating:

To develop their method — called in vitro oral processing — the researchers used different instruments to measure the physical characteristics of chips with various oil contents at each of the four stages. This enabled them to investigate the material properties that govern each specific oral processing unit operation without being impacted by the biological complexity of the oral environment.

For example, for the first bite stage, they conducted mechanical testing to measure the force required to break the chips, and for bolus formation, they measured the hydration rate of particles in buffer as the fragments became a soft solid.

Rheology, tribology and surface-science were all used in the development process. “Rheology is used to measure how a material responds to flow and deformation, while tribology is the study of friction and lubrication,” Professor Stokes explained. “We combined these engineering disciplines with surface science to provide new in-depth understanding on the behaviour of foods and drinks in the mouth, including how they respond during chewing and tongue movements, and their interaction with saliva and oral surfaces.

“As we understand the science, we assist in translating the knowledge and the development of suitable tools for the industry to use in new product development,” he said.

In this case, the researchers used the results to design a lower-fat chip coated in a thin layer of seasoning oil, which contained a small amount of a food emulsifier.

The seasoning oil made the low-fat chip more closely resemble the greasiness of a full-fat one in tests with sensory panellists, but it only added 0.5% more oil to the product.

Food scientists could also use the new technique to link physical measurements with sensory perceptions, the researchers said.

This project received funding PepsiCo., Inc. and the Australian Research Council Linkage Program (ARC LP). Professor Stokes said that the ARC LP was used to strengthened the partnership with the PepsiCo team and enabled much more scientific and engineering advances than what would have been possible via directly funded contract research. It also led to the training of PhD students, postdoctorate researchers as well as undergraduate science and engineering students, many of whom have gone on to work in the food industry in Australia, NZ, UK and the USA. “One of our former postdocs, Dr Michael Boehm, is now working in PepsiCo’s research labs in the USA,” Stokes said.

Professor Stokes’ team has worked with all manner of foods and drinks whether they be considered as solids, powders, soft solids, semi-fluids or liquids, primarily with the aim to improve the efficiency of ingredients in processing and/or improved health benefits.

“A key challenge in the food industry is reducing the amounts of sodium, added sugars and saturated fats without sacrificing the taste, flavour, texture and mouthfeel in foods and drinks,” Stokes said. “In addition, it is desirable to include more processed plant-based ingredients including dietary fibre, proteins, resistant starches and phytonutrients. However, even subtle changes in composition of processed foods and drinks can alter the consumer’s acceptability of a product for reasons that are not well understood, which thus compromises healthy choices.”

Stokes’ team now aims to consider the challenges in emerging areas such as the rise of consumer interest in plant-based foods and proteins. “In addition, we are also about to begin investigating processing challenges associated with certain native foods as part of the ARC Training Centre for Uniquely Australian Foods.”