Coke took Pepsi to court in Australia, alleging that the release of Pepsi’s glass ‘Carolina Bottle’ infringed the rights and reputation of Coke’s iconic glass ‘Contour Bottle’, or its outline or silhouette. Read about the great bottle battle and how you can protect your shapes.

On 28 November 2014, the Federal Court of Australia (Court) dismissed claims of trade mark infringement, misleading or deceptive conduct and passing off made by The Coca-Cola Company (Coke) against PepsiCo Inc, PepsiCo Australia Holdings Pty Ltd, and Schweppes Australia Pty Ltd, the manufacturer and distributor of PepsiCo Inc's products in Australia (collectively referred to as Pepsi).

Coke’s glass bottle known as the Contour Bottle is well known and Coke has sold its beverages in a variety of styles of the glass Contour Bottle in Australia since 1937.

In August 2007, Pepsi released a glass bottle of its own in Australia, known as the Carolina Bottle, which led to Coke initiating this proceeding in October 2010. 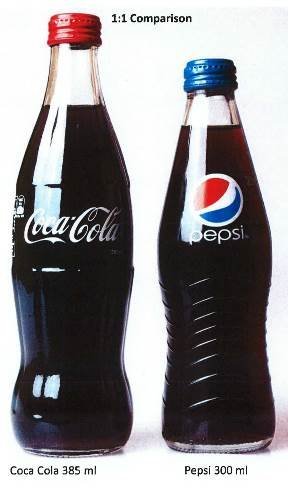 Coke alleged that the Carolina Bottle infringed four of Coke’s Australian registered trade marks for its iconic Contour Bottle and that Pepsi had engaged in misleading or deceptive conduct and committed the tort of passing off.

The four registered trade marks, which were the basis of Coke's trade mark infringement allegations against Pepsi.

In addition to the claims of trade mark infringement, Coke alleged that Pepsi had:

The Court rejected each of Coke’s claims against Pepsi. In his judgment, Justice Besanko made the following key findings.

Trade marks - use of marks

With respect to the allegations of trade mark infringement, his Honour considered the context in which Coke’s beverages in the Contour Bottle and Pepsi’s beverages in the Carolina Bottle are offered for sale and concluded that the overall shape of the Carolina Bottle was being used by Pepsi as a trade mark, as opposed to the outline or silhouette as suggested in the alternative by Coke.

As a result, his Honour held that the Carolina Bottle was not deceptively similar to any of the Coke Marks.

Misleading or deceptive conduct/passing off

Similarly, the Court dismissed Coke’s allegations that Pepsi had engaged in misleading or deceptive conduct and that its sale of Pepsi in the Carolina Bottle amounted to passing off. In particular, Coke was unable to convince the Court that it had sufficient reputation at the relevant time (in February 2009, when the Carolina Bottle was reintroduced into the Australian market on a larger scale) in the mere outline or silhouette of the Contour Bottle. His Honour found that Coke had the requisite reputation in the overall shape and detailing of the Contour Bottle well before February 2009.

Therefore, the differences between the overall shapes of the Contour Bottle and the Carolina Bottle and the other elements that would influence the purchasing decisions of consumers such as brand names, device marks or logos led Justice Besanko to conclude that there was no possibility of deception.

Shape trade marks can be valuable business assets, but applicants must be careful to file representations that depict exactly how the shape is intended to be applied or portrayed in actual use.

Shape trade marks are usually filed in circumstances where a shape has become synonymous with a party and the shape is not the subject of a registered design either because the design has expired, or no design application was filed prior to the commercial release of the design.

A strong shape mark includes features that are non-descriptive and non-functional. In Global Brand Marketing Inc v YD Pty Ltd (2008) 76 IPR 161; [2008] FCA 605, Justice Sundberg suggested that these features make a shape “more arresting of appearance and more attractive, thus providing a means of distinguishing the goods from those of others”.

Any brand owners wishing to protect the distinctive shapes of their products as a trade mark, or have their existing shape trade mark portfolio reviewed to determine if their protection is adequate, should contact Chris Round, Partner at K&L Gates.

*Caroline Judd has a focus on brand protection and experience in the registration, protection and enforcement of intellectual property rights for clients in the retail, technology and manufacturing industries.

*Simon Casinader has experience in the litigation and dispute resolution, corporate advisory and intellectual property litigation areas of K&L Gates.

Hundreds of thousands of people die preventable deaths from foodborne illness each year —...

The top five flavour launches for soft drinks in 2021 have been revealed by data and analytics...

The COVID-19 pandemic has pushed this growth, with people using honey to treat symptoms brought...