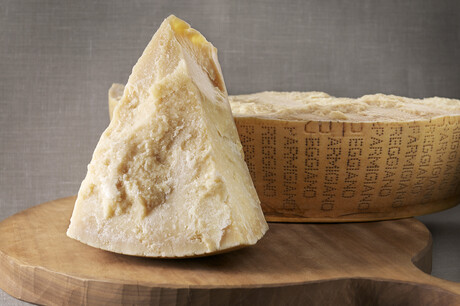 Before aged cheeses are fully mature, they’re either waxed or placed in brine for weeks to create a natural rind. The high salt content in brined cheeses can deter some consumers; however, researchers reporting in ACS Food Science & Technology have now presented a shortened brining time for Parmigiano Reggiano that results in a less salty product, while still potentially maintaining the cheese’s distinctive texture and flavour compounds.

Manufactured in select provinces in Italy, Parmigiano Reggiano is a lactose-free, crumbly and hard cheese that requires certain production processes, such as a long ripening period (minimum 12 months).

Prior to the maturing process, cheese wheels are placed in a saturated brine solution for weeks. The added salt plays a key role in the ripening process by modulating microbial growth, enzyme activity and the separation of solids from liquids, hardening the final product.

One enzyme-mediated reaction is lipolysis, in which triglyceride fats in milk break down into their key components — free fatty acids and diacylglycerides. Free fatty acids not only contribute to the taste of the cheese but are also precursors to other flavour molecules.

In the paper titled ‘Study of the Effect of NaCl on Lipolysis in Parmigiano Reggiano Cheese’, Silvia Marzocchi and colleagues wanted to test the impact of brining time on the lipolysis reactions responsible for the free fatty acids involved in Parmigiano Reggiano’s flavour profile and distinctive characteristics.

The researchers had five Parmigiano Reggiano dairies brine several cheese wheels by immersing them in a saturated salt solution for either 18 days or a shorter 12-day period. Then the wheels were ripened for 15 months under conditions typical for this type of cheese.

Salt content in fully ripened cheese was 9% lower in the samples brined for a shorter time than the group with the longer procedure.

Unexpectedly, however, the researchers found no difference in the moisture level, cholesterol and total fat in the two sets of cheeses.

The team also observed no major variations in compounds involved in the flavour profile, as most of the 32 free fatty acids had overlapping concentration ranges between the two groups.

Yet, in the cheeses with the shorter salting time, overall, the total free fatty acids and the total diacylglycerides concentration ranges were 260% and 100% higher, respectively, than the traditionally brined version, suggesting the lower salt to moisture ratio resulted in more water available to lipolysis reactions and more rapid enzymatic activity breaking down triglycerides.

The researchers said a reduced brining time for Parmigiano Reggiano could result in a product appealing to salt-conscious consumers, but sensory tests are still needed to confirm if consumers can detect differences to the overall taste and texture.

Small businesses in Australia are increasingly being led by women.

The UK's sugar tax has been a success. Is it time for Australia to follow suit?