By Fred Gale, China economist from the USDA, Economic Research Service
Tuesday, 11 May, 2021 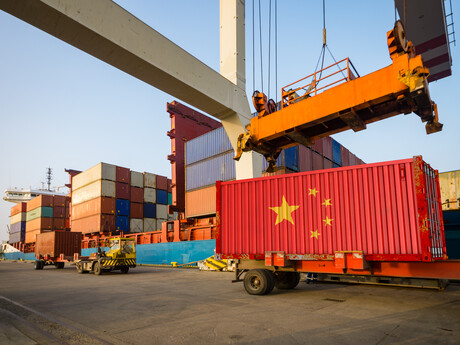 Imported foods such as seafood, meat, processed foods and beverages are becoming more common on China’s supermarket shelves and restaurant tables, creating opportunities for exporters worldwide. However, selling these products to China also presents challenges as exporters must comply with standards and food safety regulations that Chinese leaders have called “the strictest ever”.

Over the past two decades, China has imposed numerous new food-related laws and standards, mostly to address its own problems with food safety and fraud. Imported food also must meet these requirements, some of which are unique to China. Exporters of certain foods like meat and dairy must pass audits and register with Chinese authorities. Foods sold in China must bear labels in Chinese script with contact information for suppliers while certain words and phrases are banned. Some product standards specify which nutritional content and allowable additives and dyes are allowed in the country.

Customs officials inspect and test food shipments to ensure exporters comply with these requirements. Between 2006 and 2019, officials reported rejecting an average of 2600 food shipments per year from all countries. The overall risk of food shipment rejections is not high — less than 0.5% of shipments are rejected in most years — but the cost of gaining access to the market and the fallout from violations of China’s numerous laws, regulations and standards can be considerable. Shipments encountering scrutiny of inspectors could be held in storage for extended periods, destroyed or diverted to alternate countries at discount prices.

USDA’s Economic Research Service (ERS) sought to better understand how Chinese food safety requirements affect imported foods by examining the lists of rejected food shipments reported monthly by China’s customs authority. ERS compiled and analysed nearly 38,000 rejections from more than 100 countries reported over 15 years to identify trends and characterise the types of foods China rejects, the problems cited and which countries have the most products rejected.

In 2020, China refused entry to 99 US food shipments — down from 136 per year in 2018–19. The rejected products included meat, seafood, beer, drink mixes, canned noodles, infant food, raisins, prunes, almonds, honey, candy and nutritional supplements. China’s inspectors cited various problems such as lack of documentation, degradation of products, mildew, high bacterial counts, excessive moisture and presence of foreign material. They turned away products of prominent US food manufacturers, as well as those of small companies.

Food exporters from the United States and European Union (EU) have seen a decline in the number of shipments refused at the China border, possibly reflecting improved compliance from those nations. Another factor may be that Chinese inspectors have shifted attention to shipments from less developed countries, such as Vietnam, India, Ecuador and Russia, indicating exporters from those nations are likely to encounter challenges in meeting China’s requirements.

Chinese officials have introduced many new regulations and standards, and food imports have boomed, but rejections have not kept up with the swelling volume of trade. China’s food imports rose from US$14 billion to 89 billion (AU$17.8 billion to 113 billion) between 2006 and 2019 — a 12% annual growth rate at constant prices. In contrast, researchers found no systemic trend in the average of 2600 food shipments rejected annually (see chart below). Rejections rose as high as 6600 shipments in 2017 but fell below the average in each of the most recent three years.

China does not reveal the total number of imported food shipments nor the number of inspections conducted, so there is no information to determine whether changes in the number of refusals reflect changes in the number of shipments or frequency of inspections. Food is one of many product categories customs authorities inspect, and news reports of campaigns against smuggling suggest personnel and other resources might have been shifted away from inspections at ports to other priorities in some years. A surge in food import refusals in 2017 coincided with reports and news articles focused on the safety of imported food that year. A reorganisation of the Chinese government in 2018 that included customs and food inspection agencies could have contributed to the drop in refusals that year. 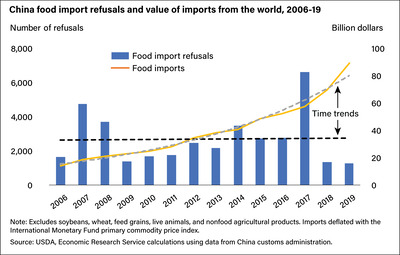 Rejected shipments included boxes of tea leaves, wine and bird’s nests (for bird’s nest soup, a Chinese delicacy), as well as shipping containers holding hundreds of tons of vegetable oil, fruit, mineral water and meat. ERS calculated rejection rates for major food categories with similar shipment sizes using the ratio of the weight of rejected shipments to the volume of imports (in metric tons). For example, China rejected an average of 1238 metric tons of meat shipments each year during 2013–19, but that was just 0.033% of the country’s average volume of meat imports (3.75 million metric tons). Refusal rates were lowest for starch, sugar, fruit and nuts — all were less than 0.01% of import volume. The sweetened beverages category showed higher refusal rates, at 0.4%, while tea, coffee, spices, prepared meat, chocolate, food preparations and alcoholic beverages came in at 0.1 to 0.2%.

Honey stands out as the only item with a refusal rate above 1%. China cited high bacteria counts, the addition of sugar, unspecified adulterants and antibiotic residues in rejections of honey from countries such as New Zealand, the European Union (EU), Australia and Thailand.

Consumer-ready items such as baked goods, pastries, snack foods, health supplements, drink mixes, candy, bottled water, wine and other beverages not only have the highest refusal rates but also comprise the largest number of refused shipments. Processed foods and beverages together accounted for 77% of refused shipments during 2013–19, while accounting for only 19% of the value of China’s food imports. 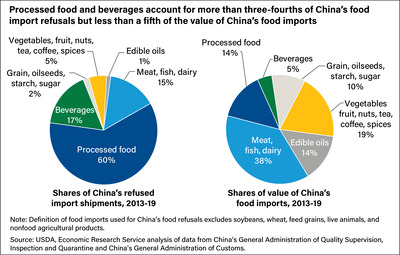 China refused food shipments from more than 100 countries and regions during 2013–19. The 27 EU countries combined had the largest number of annual refusals, accounting for a fourth of rejected shipments. The EU is the largest supplier of China’s imports of consumer-ready foods and wines, which tend to be refused with the highest frequency. The large number of EU rejections, therefore, seems to reflect the large volume of China–EU trade in these products.

China’s neighbours in Asia accounted for a disproportionately large share of refusals. Taiwan, Japan, South Korea and Hong Kong accounted for 35% of refused shipments, although they accounted for just 4% of China’s food imports. Other Asian countries — Thailand, Malaysia, Vietnam and Indonesia — were also among the leading suppliers of refused shipments. In contrast, the US, New Zealand and Canada had relatively low rejection numbers. 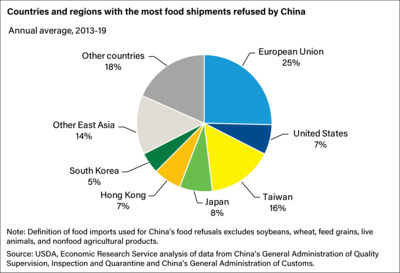 During 2020, Chinese inspectors appear to have shifted their attention from EU and US food to a diverse group of other countries and regions. Refusals of EU and US food shipments during 2020 were down from 2018 and less than half their 2013–19 averages (see chart below). The United States accounted for 5% of refusals in 2020, lower than its 7% share in past years. The EU’s share shrank to 12% in 2020. Australia, Canada and New Zealand each had well under 100 shipments refused during 2020. China refused just 12 shipments from Canadian exporters in 2020. 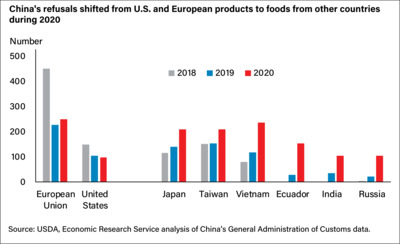 China’s concern about the transmission of the coronavirus from the packaging of imported frozen food may have contributed to the increase in refusals from Ecuador, Vietnam and India during 2020. Chinese regulators focused greater attention on imported seafood and meat throughout that year as the virus spread in countries that export these products to China.

Officials began widespread sanitation and testing imported meat and seafood after a seafood counter in a wholesale market was linked to an outbreak in Beijing during June 2020. By December, China’s market regulatory authority set up a system to sanitise shipments of imported frozen food at the border, track them as they moved to warehouses and markets throughout the country and segregate them on separate shelves in retail stores. According to a February 2021 announcement by China’s customs administration, authorities tested 1.49 million samples taken from imported frozen food — mainly seafood and meat — with 79 positive COVID-19 results reported, found mainly on the outer packaging of shipments.

China’s February 2021 customs announcement showed it had suspended imported foods from 129 exporters in 21 countries because of concerns about COVID-19 transmission. Among those were three Ecuadorean shrimp exporters suspended in July 2020 after Chinese inspectors found traces of the COVID-19 virus on the packaging and a shipping container shipped by the companies. Frozen shrimp accounted for all but two of Ecuador’s refusals in 2020. More than 20 shrimp shipments each from India and Vietnam were also refused. However, none of the refusals cited the COVID-19 virus.

Instead, the refusals of shrimp from Ecuador and other countries cited “detection of animal disease”, a violation that had been reported regularly for rejections of shrimp before the COVID-19 pandemic’s onset. About 30 refused shipments of shrimp from Vietnam and some from India were also described as “South American shrimp”, suggesting that items had been transshipped to evade China’s suspension of Ecuadorean shrimp. However, the shrimp from Vietnam were cited for the use of phosphates as an additive, a violation unrelated to COVID-19.

Other rejection reasons in 2020

Food shipment rejections for reasons not related to COVID-19 also rose in 2020. China turned down chilli peppers and peanuts from Vietnam, citing labelling violations, foreign material, pesticide residues, filth and mould. Inspectors said cumin seeds from India were contaminated with pesticides and Indian chilli peppers were also cited for mould. Russian shipments of chicken paws were reported to be degraded or spoiled and beef was refused for lacking proper labels. The most frequently cited violations for Japanese and Taiwanese products were lack of documentation, inconsistencies in documents, lack of inspections and problems with labels.

Many food exporters see potential profit in China’s growing market, but exporters also face potential risk when shipments are rejected for violating Chinese regulations. While rejections are relatively infrequent and have not kept up with the rapid trade growth, they can be costly to exporters when they do occur. The number of rejections occasionally spikes during crackdowns and other unexpected events, such as China’s concerns about transmission of COVID-19 on imported food packaging. These rejections provide useful information for commercial actors and policymakers watching China’s growing role in global food markets.

All graphs composed by the USDA Economic Research Service.