Three awards in one night for Wiley

In Melbourne, the company and its project director Graham Harvey were awarded an Australian Institute of Building (AIB) 2013 Professional Builder of the Year Award, as well as the AIB’s National Award in the Research, Development and Technology category. These awards are Wiley’s fifth and sixth industry awards in as many months.

The Primo facility in Wacol, Brisbane.

In Brisbane, Wiley was recognised with an Australian Institute of Project Management (AIPM) State Project Management Achievement Award (PMAA) for its management and delivery of Primo’s $130 million smallgoods-processing facility project. The company took out the Queensland Chapter Award in the Construction/Engineering Project over $100 million category. 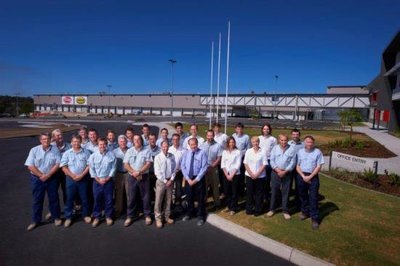 The Wiley project team at the Primo facility.

“We had no expectation of winning such a prestigious award; this award is the pinnacle of the building profession in Australia for 2013,” Harvey said of the Professional Builder of the Year Award.

“This award is a landmark achievement for Wiley; it is a testament to the many years of diligent hard work by our entire team,” said Managing Director Tom Wiley.

“Graham Harvey led our project team to deliver this outstanding facility for Primo. This award is well-deserved industry recognition to both our team and Graham as he adds this project to his long list of successful projects over his 40-year tenure at Wiley.”

The Wiley project is automatically in the running for the National AIPM Project Management Achievement Award and is also competing at the national level of the Queensland Master Builders Association (QMBA) Housing & Construction Awards, which will be announced in October.