Tecpro and UOW collaborated to solve a persistent dust problem at Centennial Coal’s Mandalong Mine near Newcastle. The mine was experiencing a significant dust problem where the coal drops from the crusher to the underground bin. 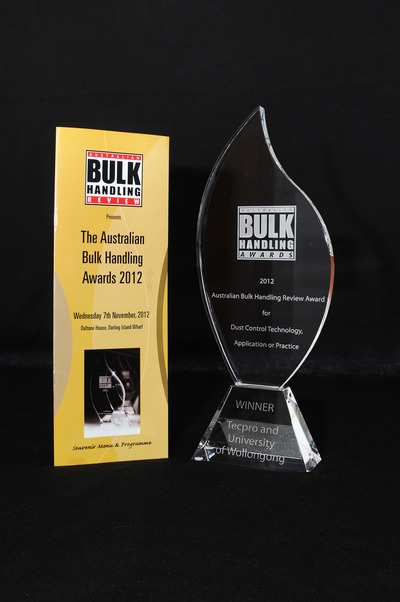 “After trying a variety of approaches without success, Centennial Coal invited Dr Ting Ren of the University of Wollongong to review the problem,” said Graeme Cooper, Managing Director of Tecpro Australia.

“Because we had collaborated with Dr Ren on dust suppression projects in the past, he suggested the mine also contact us to provide expertise on the design of a specialist nozzle system to combat the dust.” 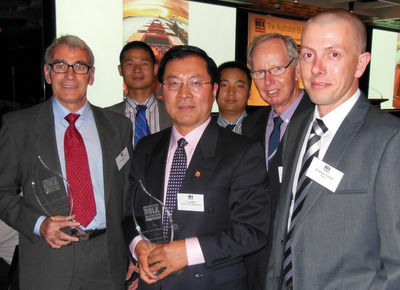 The Tecpro and UOW teams collect the award.

CFD modelling conducted by Dr Ren and his team identified the source and direction of the airflow that was carrying the dust.

“Using the data provided by Dr Ren’s CFD modelling, we produced detailed drawings indicating the optimum position and direction of spray nozzles around the rim of the crusher bin,” said Cooper.

“We also recommended the precise types of nozzles to use that would effectively suppress the dust. Many people would be surprised to know there are over 25,000 different types of nozzles that we could choose from, and so it was critically important to know which would provide the best outcome in this setting.”

Tecpro and the UOW team devised a solution that directs a fine curtain of mist inwards from the rim towards the crusher in the centre. Water droplets created by the nozzles are similar in size to the dimensions of the dust particles, making them more likely to attract and combine. Assisted by gravity, the dust is captured and falls back into the bin instead of remaining airborne.

Since the new solution was installed, air quality in the affected area has improved by approximately 90%, which contributes to Centennial Coal’s ongoing program of improving environmental safety.

“It was the first time we’d ever entered an award so we were especially thrilled to win,” said Cooper. “It’s wonderful to gain this recognition for the specialised work we do in solving difficult dust problems. We were also particularly pleased to win in partnership with Dr Ren and his team as our expertise complements each other very well.”