Getting down to fizziness: baby boomers choose tonic water over cola

While sales of soft drinks like colas and lemonades have taken a nose dive in the last five years, another type of soft drink has quietly been gaining ground, new research from Roy Morgan Research shows.

Between January 2009 and December 2013, consumption of unflavoured sparkling mineral water increased from 7 to 8%, while the percentage of Australians drinking ‘mixer’ drinks such as tonic water or dry ginger ale rose from 10 to 12%.

Although far fewer people consume these types of drinks than Coke, Sprite, Fanta and so on, the growth of these categories contrasts with the gradual decline of conventional soft drinks, Roy Morgan says.

The baby boomer generation is particularly fond of sparkling drinks: 16% drink mixers and 10% drink unflavoured sparkling mineral water in an average seven-day period. Both of these figures are above the national average. Pre-boomers (those born pre-1946) are similarly enamoured of mixers, with 17% drinking them in a seven-day period, but aren’t so keen on sparkling mineral water - only 7% drink this weekly.

Gen Y and Gen Z aren’t sold on mineral waters and mixers and are more likely to drink soft drinks than the boomer generations - but even their consumption of soft drinks appears to be gradually declining. 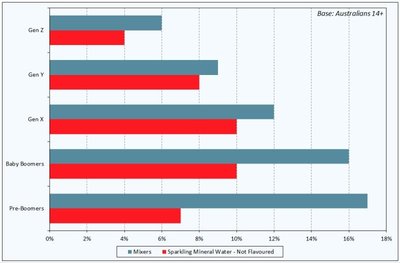 “While younger Australians aren’t quite as keen on unflavoured sparkling mineral water and mixers as their older counterparts, the overall move to these drinks is changing the nature of the non-alcoholic beverage market. Not only are we moving gradually away from soft drinks, but fewer of us are drinking fruit juices, energy drinks and sports/health drinks than we were five years ago too.

“It seems our tastes are slowly but surely evolving towards ‘lighter’, less heavily flavoured beverages.”