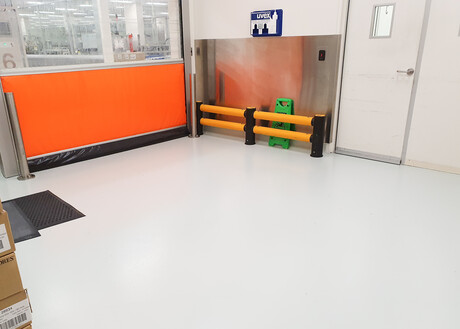 Flooring specialists, Allied Finishes, have spent the past two years working on a new product that sterilises production floors without creating a slip hazard — SteriFloor.

Allied Finishes recently received an ISO 22196 certification for SteriFloor, the new antimicrobial suite of flooring solutions developed by the company.

The ISO 22196 certification specifies a method of evaluating the presence bacteria on antibacterial-treated plastics and other product surfaces and requires a standard review every five years.

A few key factors make the certification of extra value to those who obtain it, firstly the method is quantitative so the results can be reproducible, which in turn should increaser confidence in the product.

The method, which is quite flexible, also tests for both growth inhibiting bacteria and bacteria-killing properties in the product.

SteriFloor was designed to create an antimicrobial surface in food and beverage manufacturing while adhering to WHS by not creating a slip hazard, something which plagued earlier attempts.

Allied Finishes suite of solutions is currently at six since completing the research and development phase with the help of scientists and a willing client.

While flooring is recognised as being passively antimicrobial because bacteria growth isn’t made easier, the floors don’t necessarily actively combat it, until now.

A research intern, Jayanti Arun Mendhi, joined the company in 2021 to analyse and test the range against current flooring.

The client agreed to take part in the testing and Mendhi visited the site on two occasions to better understand the problems which needed solving.

“I had informative conversations with the clients to explain to them how antimicrobial coatings work and how improvements in technology could benefit their factories,” said Mendhi.

Through her research Mendhi confirmed SteriFloor was among the best antimicrobial technology on the market.

As well as testing the product against competitors, Mendhi also conducted microbial tests comparing a SteriFloor sample to an untreated polyethene cement sample.

“Along with this, microscopy imaging was done to visualise samples with and without bacteria to better understand the existing and optimised products.”

Mendhi then prepared an educational report on her findings for the clients to better understand its advantages.

“Extensive research was done through research databases to acquire more knowledge about some of the less commonly understood problems of the food industry.”

The result which helped seal the release of SteriFloor came when, after two years, a site which employed the technology saw no bacteria growth on its floors for the entire duration.

This created confidence in SteriFloor solving a problem which has plagued the industry for some time.

Cryogenic freezing and chilling: an agile solution to improve quality and productivity

Using liquid nitrogen or carbon dioxide can offer a useful solution for food manufacturers who...

Heat pumps that have been common in the HVAC and refrigeration sectors but are new for the...

What is a food-safe floor?

There are certain factors to look for that determine a food-safe floor.