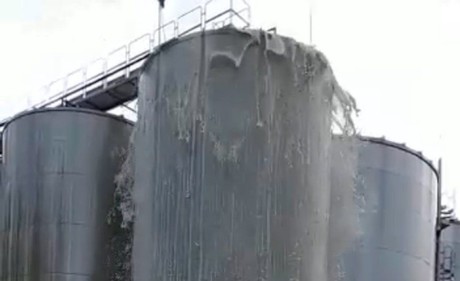 A stainless steel fermentation tank at the Conegliano Veneto winery in northern Italy has exploded resulting in the loss of around 30,000 L of prosecco.

Unlike champagne, prosecco is usually produced using the Charmat-Martinotti method, with the secondary fermentation taking place in stainless steel pressure tanks. Using this method, sparkling wines can be produced at a considerably lower cost than traditional method wines. The wine is mixed in a stainless steel pressure tank, together with sugar and yeast. When the sugar is converted into alcohol and carbon dioxide, the yeast is filtered and removed, and the wine is bottled.

But human error can interrupt this process.

It is assumed that the tank at the Conegliano Veneto winery was overfilled or the tank lid was faulty, resulting in the explosion of the tank and the loss of the wine.

The incident was posted to Facebook by L’enoteca Zanardo Giussano and generated millions of hits and witty comments.You can watch the video posted by the winery employee here.

The loss of about 40,000 bottles of prosecco won’t be good for the winery but across the globe it probably won’t affect prosecco drinkers as forecasts suggest the amount of prosecco being produced in 2018 is around 440 million bottles higher than the 2017 harvest.

Hopefully 2018’s 493.3 million bottles of prosecco will be enough for us all, even minus the 40,000 bottles lost in the explosion.

Tetra Pak has doubled its cheese-making solution capacity in Poland after opening a €25...