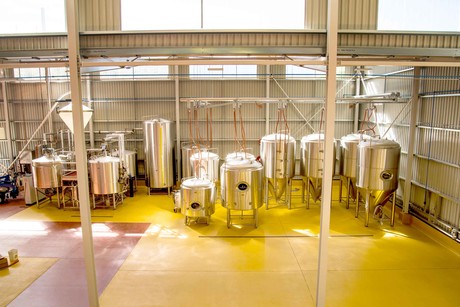 In Bright in Victoria, there is the aptly named Bright Brewery, which has been brewing ales with local hops and fresh mountain water since 2005. Part of the craft brewery boom sweeping Australia, the brewery and bar began operations in two small tin sheds. In 2012 the brewery gained a new and much-expanded look with 24 taps, multiple seating areas and a view into the brewery.

Past the usual ambers, pales, porters and witbiers, beer enthusiasts can lock lips with a Pumpkin Harvest Ale (brewed with Styrian pumpkins grown by in nearby Ovens) or a Wandi Nut Brown Ale (made with walnuts from The Artisan Mill in Ovens).

Recently, Bright Brewery constructed a brand new, purpose designed and built brewing facility, with excellent consideration given to drain placement and location of the mezzanine platform, to ensure efficient production.

As part of the project, a total 1500 m2 of the hygienic and antimicrobial cementitious polyurethane range Flowfresh from Flowcrete has been installed.

600 m2 of the slip-resistant Flowfresh SR was installed in varying thicknesses across the heavy-duty areas of the brewery in Warm Buff. These areas required a robust system that would handle both acids and cleaning chemicals and the thermal changes associated with fermentation and strict hygiene controls.

A further 900 m2 of Flowfresh Sealer was applied in the light-duty walkways and passageways in Tile Red, which would stand up to frequent foot traffic all while providing a hygienic platform underfoot.

Flowfresh is a line of HACCP International-certified, antimicrobial-treated cementitious urethane flooring designed predominantly for the food and beverage industry.

The permanence of Flowfresh’s bacteria killing property was put to the test when it was analysed according to the ISO 22196 standard, which measures the efficacy of antibacterial-treated surfaces. As part of this test, samples of Flowfresh were hot washed and abraded multiple times, over and above the ISO 22196 requirements.

This intensive abuse was undertaken to recreate the reality of what a floor in a food plant would be subjected to and Flowfresh apparently “more than proved that it was able to survive such conditions and maintain its superior hygiene credentials”. 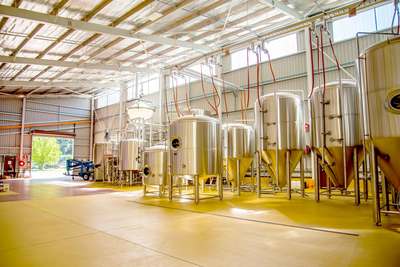