The benefits of automated plate freezing

One of Australia’s leading packaged meat exporters recently upgraded its refrigeration plant to include automated plate freezing technology. In doing so, it increased capacity by over 20% while reducing labour costs.

Plate freezing has been used in the meat, fresh produce and dairy industries for many decades, offering a range of benefits over alternative forms of freezing such as air blasting.

The process sees refrigerated, aluminium plates compress to make direct contact with a product placed in between. Heat is transferred by conduction from the product, via packaging if any, to the evaporator surfaces (the plates) containing a refrigerant, often ammonia.

The freezing cycle, in the case of packaged beef, is 24 hours compared to 48 hours for air blast freezing. This is just one of a number of benefits that outweigh the cost impost associated with the technology, which is typically 40% greater per unit quantity frozen.

Others include improved shipping efficiencies resulting from the use of uniform-sized cartons that are both flat-topped and bottomed to allow for sufficient contact with the plate surfaces; and a reduction in energy costs associated with the elimination of fans.

According to Brendan Dever, Business Development Manager with Milmeq, plate freezing is widely used to freeze beef, lamb, offal, pet food, fish and cream in Australia, New Zealand and around the world.

He says that along with supplying the world’s largest horizontal plate freezers, the company also supplies vertical plate freezers commonly used on fishing trawlers for rapid freezing of seafood while at sea.

Many Australian packaged beef manufacturers use plate freezing, particularly if geared for the export market.

The process typically involves cartons of beef travelling to the plate freezer enclosure on a conveyer belt directly from the boning room, where they are ‘marshalled’ into ‘slugs’ on the in-feed conveyer of the nominated plate freezer and pushed onto the plate station via an electric-operated pusher.

When the station is loaded, the stack indexes upwards for loading of the next station, with the transfer of the carton slugs onto the plate ejecting the same number of frozen cartons onto the unload conveyer at the rear of the stack. When all stations are loaded, the stack lowers until it is closed and a hydraulic closing pressure is applied to ensure full plate contact on the top and bottom surfaces of the carton.

According to Dever, dehumidification is among the most important elements in providing optimum availability of the plate freezers.

He says that typically, a stream of low dew point air is directed into the plate freezer enclosure to maintain a positive pressure and a dew point of between -30 and -35°C.

“A dry enclosure ensures that photo sensors used in the freezing process remain frost free,” says Dever. “It also means the time between defrosts can be extended from months to almost indefinitely.”

Manual plate freezers allow for loading and unloading of product by hand, with the plate stack hydraulically lifted, presenting the station at the optimum height for the operator. Spacers can either be fixed or removable, the latter providing the advantage of allowing the stack to be collapsed to a lower height when unloading, thus reducing building height requirements.

Semiautomatic plate freezers allow the operator to manually set the stack to the load height, with the ‘carton slug’ marshalled onto the load conveyer at the front of the plate freezer. The operator initiates the electric pusher through a push and return cycle, and a row of fresh cartons is transferred to the plate, displacing a row of frozen cartons at the rear.

Fully automatic units provide for cartons to be loaded and unloaded automatically, with a PLC controlling the conveyers, hydraulic lift cylinders, carton loader and carton gates. Operator control is via a HMI screen.

When the operator initiates auto operation at the commencement of a shift, the system opens the current plate freezer to the last station and row loaded on the previous shift and commences loading at that row. The PLC controls loading of individual stations, sequencing through the stations in each plate stack and preparing subsequent stacks to be loaded.

In the event of an interruption to loading, perhaps as a result of misshapen cartons or loose carton flaps, the operator is instantly alerted.

EC Throsby Pty Ltd is one of Australia’s leading packaged beef exporters, with the family having grown and processed livestock in the New South Wales Hunter Valley since the early 1950s. 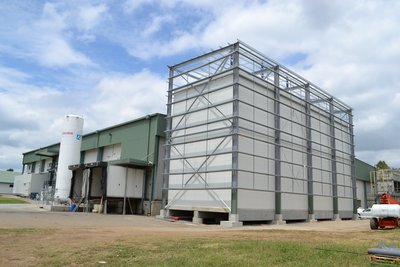 Its current hot boning process plant in Singleton produces product lines such as bone-in and boneless beef, offal, fancy meats, tripe and other beef products, of which about 98% is exported.

Built in 2000, the state-of-the-art facility features a slaughter floor, boning room, offal and tripe rooms, cold store, rendering plant and plate freezers - all designed and constructed to deliver high productivity with a minimal impact on plant operators or the environment.

The majority of the equipment in the plant was originally supplied by Milmeq, so understandably, the company was approached by EC Throsby and consultant Meateng in 2010 when a facility upgrade was planned.

The upgrade intended to add a fifth plate freezer beside the plant’s existing four manual units to improve plant capacity and allow for a planned increase in production.

This option was rejected, however, due to plant disruption and time constraints. It was then that the construction of a stand-alone building to house the additional plate stack was proposed.

During discussions, Milmeq drew on its 40-plus years of experience in refrigeration and freezing systems and proposed that the existing four manual plate freezers be relocated to the new building with the addition of four stations to each stack, and that they be converted to fully automatic operation.

This would provide the increased capacity required, while also improving efficiency and allowing the redeployment of labour to other parts of the plant. Being a mining area, businesses in Singleton are subject to continuing pressures in sourcing personnel.

“When the decision was taken to extend and automate the existing manual freezers, relocation was the only option that would allow the project to be completed within the annual plant shutdown period,” says Dever.

The new building was constructed by EC Throsby in the latter part of 2010, and part of the plate freezer infrastructure, including access platforms and walkways, was in place prior to the shutdown of the manual plates.

Additional work was also required to extend the structural frame of the facility and fit new lift cylinders. 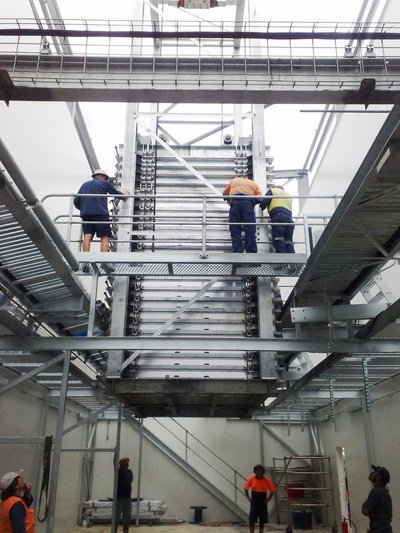 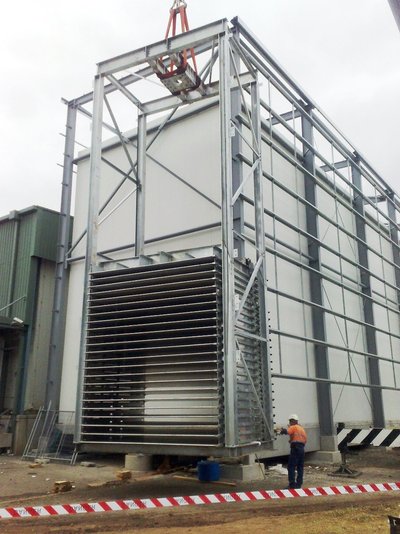 Installation of the new plant and equipment.

With the manual plate freezers handed over to Milmeq on 27 December 2010 and the new facility set to recommence operations just 20 days later, the timeframe naturally proved challenging to all involved.

“It was overcome through detailed planning and the close cooperation of the parties involved,” says Dever.

“In particular, the efforts of Peter Thompson and the team at Meateng were critical in coordinating the project activities. The building construction program, the production requirements of the client and the plate freezer program were project managed by Peter Sullivan and EC Throsby.”

By adding four new plates to each of the original four plate freezers, capacity was increased by 22%. Their conversion to automatic operation also offered a secondary advantage and a possibly greater impact, says Dever, by improving the entire production flow through the plant.

“Under the manual operation, a team of workers would fully unload two plate freezers, before part of that team would begin palletising and loading those cartons to containers or freezer storage. The rest of the team would load new production into the emptied plates,” he says. 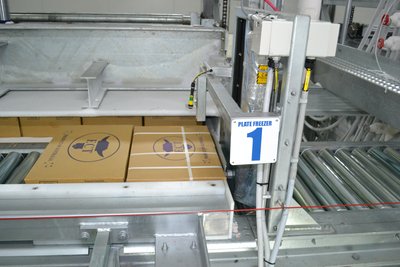 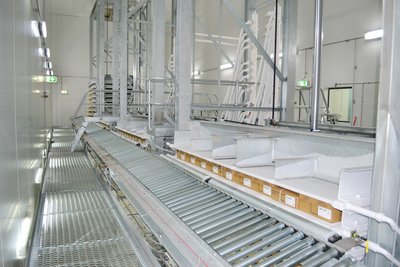 “This process would then be repeated for the remaining plates. Apart from the inherent disadvantages of working in batch lots, it also reduced the closed freezing time for the plates to 16 hours per cycle.”

The change to automated load and unload immediately removed these inefficiencies and resulted in a very steady flow of product from the packing areas to containers and freezer storage.

“It also allowed an increase in freezing time to 20 hours, with an accompanying rise in plant room evaporating temperature, resulting in a very significant annual energy saving,” Dever says. 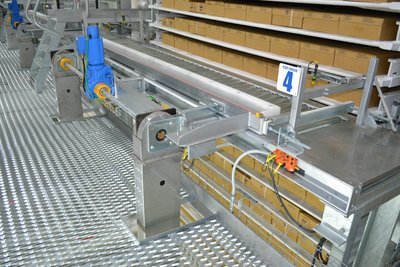 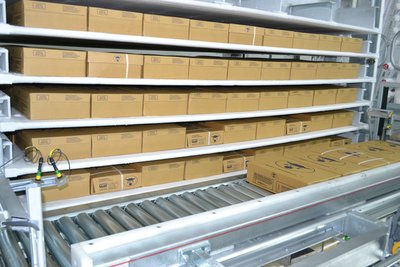 Over 12 months since the upgrade plant was commissioned, it continues to operate as intended with the design increase in plant room evaporating temperature now implemented.

Along with forecast labour savings being realised, it has also resulted in vastly improved carton presentation, almost eliminated damage claims and reduced forklift movements with a subsequent reduction in structural repairs and maintenance.

Dever says the ongoing maintenance requirements of the plate freezers will be negligible, with service checks carried out quarterly and only the dehumidifier requiring regular filter cleaning.

The desiccant rotor requires replacement at approximately seven-year intervals, while the hydraulic lift cylinder - typically a 200 mm bore cylinder with 5 m stroke - requires seals to be replaced at five- or ten-year intervals depending on duty.

The only other maintenance requirement of the plant is that of the conveying systems, which are similar to chilling and freezing tunnels with an equivalent throughput.

Dever says plate freezing technology continues to evolve, as does its range of applications.

An emerging one is the freezing of meat for human consumption, via direct contact between vertical plates - a process that has apparently been used for many years in pet food processing.

However, a hurdle confronting this application is local regulations relating to the contact of food with aluminium plates. While permissible in Europe, this is not the case in Australia, where plates must feature an inert coating such as teflon.

“In existing operations in Europe, the meat is frozen in 80 mm blocks between vertical plates, then automatically unloaded and stacked on pallets with a thin film separating each block on the pallet,” explains Dever.

“The entire pallet load is then protected with an outer shrink-wrapped layer.”

He says the advantages of this process relate to the elimination of packaging. Freezing times are faster, packaging and disposal costs are reduced, and the incidence of product contamination from plastic being trapped during the freezing of conventional cartoned product is lessened.

“Even though the Australian meat industry has generally adopted a carton size based on CSIRO’s work in the 1980s to promote a standard carton for manufacturing meat, the reality is the slight dimension variations between plants mean that each plate freezer needs to be custom designed and built,” says Dever.

This means varying carton sizes can also be accommodated for, as was the case at the EC Throsby installation where the plate freezer design allowed for up to three different carton sizes.

“Typical plate freezers in the seafood industry are designed for a product thickness of 70 to 80 mm, with freezing times of a few hours. Conversely, the export beef industry is geared to the 27.2 kg carton that is typically 160 mm thick,” adds Dever.

“As such, all conditions need to be optimised to achieve the required core temperature within a 24-hour cycle.”

As the supply cold chain continues to improve, and international demand for Australian produce increases, plate freezing technology is sure to play an important and evolving role in local manufacturing.

This article originally appeared in the the AIRAH publication HVAC&R Nation. It is reproduced with permission.

A key feature of the meat processing facility is the large rooftop solar installation, which...