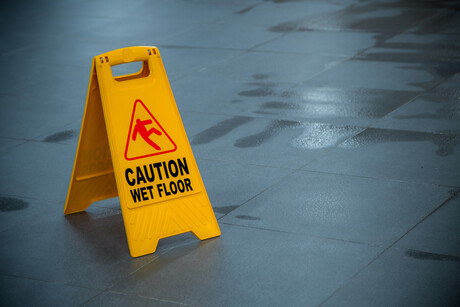 Friction is the resistance to motion of one surface or object moving relative to another. The frictional relationship between two objects has beneficial effects: when you strike a match, friction lights a flame; when you use your vehicle’s brakes, friction helps bring it to a stop. This same relationship, when leveraged properly, can help prevent slips and falls in the workplace.

Friction is caused, in part, by small features on the two surfaces in contact. Even if a floor may look smooth there is still some degree of topography; however, these roughness features can be difficult to measure, especially on a small scale.

The University of Pittsburgh’s Swanson School engineering collaborators Kurt Beschorner and Tevis Jacobs will use an award from the National Institute for Occupational Safety & Health (NIOSH) to measure roughness on what is claimed to be the smallest scales ever measured. They will use those measurements to build a model of friction performance with the long-term goal of innovating high-friction flooring to prevent occupational slips and falls.

In Australia, there were 26,000 serious claims for falls, slips and trips in 2018/19 according to the key WHS statistics released by Safe Work Australia. And in the US, slips and falls in the workplace have an annual cost of $10 billion in workers’ compensation.

“Designing specific, high-friction flooring could mitigate these injuries, but we need a better understanding of the flooring factors that lead to friction,” said Beschorner, associate professor of bioengineering.

“To date, despite research worldwide, no one has yet reliably connected flooring topography to friction measurements for flooring,” said Eric Astrachan, executive director of the Tile Council of North America. “This is the ‘Holy Grail’ for flooring design, where an understanding of measurable topography parameters — parameters that also affect aesthetics and cleanability — can be used in the design phase to engineer flooring slip resistance.”

Finite element models are used to simulate interactions between rough shoe and floor surfaces. Rubber materials absorb energy when they deform. Flooring peaks deform the rubber material when the two are sliding against each other causing energy to be absorbed. This absorbed energy is the origin for some of the friction forces that prevent a slip. Image credit: University of Pittsburgh

Studies suggest that small-scale topography — raised features resembling a mountain range on the micron or nanometer scale — is key to managing slips on a surface. Beschorner and Jacobs will measure this type of floor-surface topography and create a predictive model of friction based on the results.

“For this project, we will combine traditional measurements with metrics that can target smaller scales, including scanning electron microscopy,” Beschorner said.

Traditionally, researchers would use stylus profilometry to measure surface topography, but that technique has its limitations, particularly on a small scale. 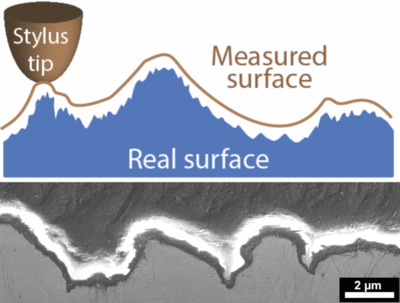 “Stylus profilometry sort of functions like a record player — a sharp needle is dragged across the surface, measuring its height as it moves. But this device does not effectively detect the small features that are critical for shoe-floor friction,” said Jacobs, associate professor of mechanical and materials science.

“Instead, we are cutting out a cross-section of the flooring and using electron microscopy, which can measure features that are one thousand times smaller. These new measurements will allow us to establish the science behind roughness-dependent friction, rather than just using trial and error to find the best surfaces.”