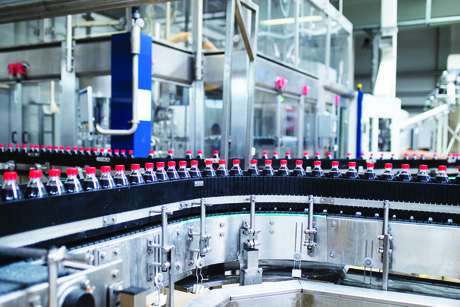 Cooling has a very large impact on a beverage business — everything from processing to bottling, productivity, running costs and environmental sustainability is affected by traditional ‘central’ cooling systems. Now a new Coca-Cola Andina Group plant in Brazil has opted away from the traditional central cooling system to go with Frigel’s Ecodry system — a ‘process-synchronised cooling solution’.

With 11 plants in Chile, Brazil, Argentina and Paraguay, Coca-Cola Andina Group is one of the most important soft drink processors in Latin America. Its branch (Coca-Cola Andina Brasil) is building a state-of-the-art facility in Rio de Janeiro that will support the increasing demand for carbonated soft drinks (CSD) and mineral water in the region.

The implementation of this high-tech plant is planned in three phases, with the installation of six, latest generation, high-throughput bottling lines supplied by Krones.

The first phase of the project (2017) will start with three lines delivering an expected production of 400 million litres of beverages/year. This will include the world’s largest single bottling line, which is able to fill 78,000 litres/h.

The project has been developed with all the latest technologies available today for CSD processing and designed with a modular concept in which each processing line is a separate ‘production/cost unit’ to be operated and managed separately. This innovative approach will give the new facility higher productivity, total production flexibility, much better cost control and easy future expandability.

Instead of the traditional central cooling system, with this ammonia-free, plug-and-play, modular concept, each bottling line will have its own Multiple-Cascade Refrigeration Unit (MultiStage) specifically designed for the application. Super compact, inverter driven, factory built and pretested, each cooling unit will be installed close to the processing line and digitally synchronised with it, providing the optimum cooling performance required at any given time according to actual product carbonation needs.

For this first phase of the project, Coca-Cola Andina is installing three MultiStage units rated for 450, 1100 and 2200 kW cooling capacities, connected to each of the three bottling lines rated for 33,000 L/h, 48,000 L/h and 78,000 L/h respectively. Each one may operate at a different coolant temperature: from 20°C for carbonated water to 12°C for Coca Cola in 3 L one-way PET bottles. Additionally, each cooling unit is also a heat pump, so heat extracted from the beverage before carbonation is recovered, producing hot water up to 50°C to heat up the bottled product through warmer tunnels, thus avoiding condensation in the tropical ambient conditions of Rio de Janeiro.

To complete the system, the excess heat generated will be rejected to ambient with a central Ecodry Adiabatic Cooling System (instead of evaporative cooling tower), which provides the MultiStage unit condensers with maintenance-free, close circuit water with almost no water or chemical consumption.

The adiabatic cooling system, which will provide a cooling capacity of 1500 kW (with two coolers with 20 fans each) is being installed outdoors in the utilities area. One simple set of non-insulated piping mains and drops will connect it to each water-cooled MultiStage cooling unit installed indoors and close to each processing line.

Coca-Cola Andina, after a deep technical and financial analysis, chose Frigel’s turnkey solution, based on the following major advantages compared to a traditional central cooling system: 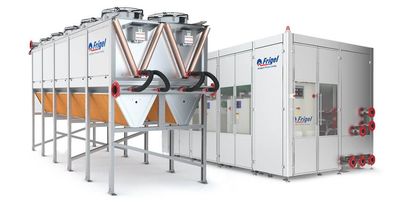 Frigel manufactures and markets intelligent, integrated cooling systems, made of a variety of components, such as the Ecodry adiabatic liquid cooler, Microgel, Heavygel and Multistage chillers and chiller/temperature control units, as well as a full array of pumping and filtration equipment, all designed and engineered to fit specific applications, such as beverage processing. The company develops and customises internally all microprocessor and PLC-based controls for all its products and solutions.