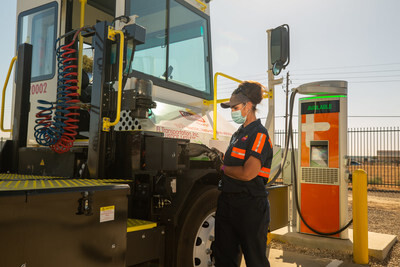 Frito-Lay, a snack food subsidiary of PepsiCo, has announced it is on track to replace its diesel-powered fleet equipment with zero- (ZE) and near-zero emission (NZE) technologies at its California plant by the end of 2021.

The sustainability initiative has already cut greenhouse gas emissions (GHG) in half in its absolute fleet and reduced its diesel usage by 78% at the site.

Launched in October 2019, the 500,000-square-foot facility was designed to showcase PepsiCo and Frito-Lay’s expertise for environmentally sustainable manufacturing, warehousing and distribution.

"Frito-Lay and PepsiCo are dedicated to reducing our environmental impact, especially in the more than 200 communities where we operate," said Steve Hanson, senior director, fleet operations, engineering and sustainability for Frito-Lay.

"We anticipate overall absolute GHG emissions will be reduced by 5480 metric tons annually and diesel usage will be eliminated entirely from the Modesto fleet operations when fully implemented — the equivalent of removing nearly 13 million miles driven by passenger cars."

Coca-Cola Amatil has joined the global RE100 renewable energy initiative and committed to power...

Bombay Sapphire has announced it is on track to have all 10 of its botanical ingredients be...