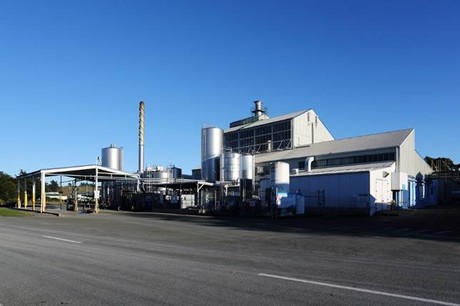 Fonterra’s dairy factory in the town of Brightwater, New Zealand, is set to reduce its carbon dioxide emissions by 25%, in a move that will significantly reduce the site’s reliance on coal.

Thanks to funding support from the Energy Efficiency and Conservation Authority (EECA), conversion is about to get underway on Brightwater’s existing coal boiler, adding capacity to burn wood biomass to generate steam. It’s a move that will cut emissions from the factory by around 2400 tonnes a year — roughly the same as taking 530 cars off the road.

Fonterra Chief Operating Officer Global Operations Robert Spurway said the move to a co-fired boiler is a significant step towards achieving Fonterra’s emission reduction targets, with the move to convert the existing Brightwater boiler following a successful trial that was undertaken in 2017.

“Last year we joined forces with the Ministry for the Environment to develop a roadmap to a low-emissions future, which included a commitment to undertake a demonstration of co-firing wood biomass with coal at one of our sites,” Spurway said.

“Now, with the support of EECA, we’re putting our co-firing strategy into action. Brightwater’s transition to a lower emission energy source is a tangible step toward achieving our target of reducing our Global Operations emissions by 30% by 2030, and our longer-term goal of net zero emissions by 2050.”

There are no known wood-fired boilers at scale in the New Zealand dairy manufacturing sector. This project will thus demonstrate a pathway towards full displacement of coal, both for Fonterra and other process heat users, and has the potential to be a sustainability game changer.

“This is exactly the type of demonstration project that EECA looks to support,” said EECA Business Group Manager Market Engagement Greg Visser. “Our funding helps de-risk investment in new technology applications where there are big emissions reductions on offer. It’s a great opportunity for replication across Fonterra — and by others looking to adopt this technology to save energy.”

Lyttelton Engineering, the original manufacturer of the boiler, will be working on the conversion with engineering consultant WorleyParsons. It is expected that the boiler will be able to co-fire with wood biomass by October this year.

An Australian supplier for the food packaging and industrial manufacturing industries, Jet...

Call to phase out chemicals in food packaging

Environmental groups are calling for policymakers to phase out toxic chemicals from food...

New $345 million hospital in the heart of Adelaide

Call for manufacturing to be designated an essential industry