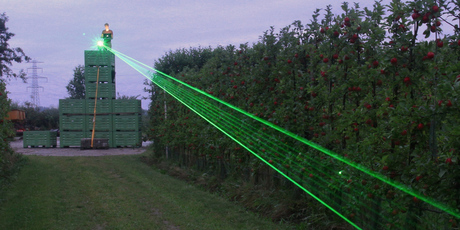 The European Commission is moving towards the elimination of rodenticide use by funding a project to develop a laser fence to protect crops against unwanted animals.

Every year, European farmers lose billions of euros as a result of birds and other animals that eat and destroy crops. Chemical poisons are often used to control these pests; however, chemicals can accumulate in the food chain, with health implications for humans and animals.

With a time span of three years and a budget just over €3 million, the developers of the LIFE Laser Fence aim to eliminate rodenticide use, decrease crop losses by half and create awareness for the negative effects of chemicals and their impacts on the environment in Europe. The project will be developed and tested as part of the LIFE EU program.

Dr Alex Mason, who specialises in the development and characterisation of sensor technologies at Liverpool John Moores University is the project leader of LIFE Laser Fence, has created a laser laboratory for the project. “Here we can experiment with new techniques and test on a larger scale for even more potential,” said Mason.

The Arnott's Group has set its sustainability agenda by releasing its first formal...

With 60 founding members, the ANZPAC Plastics Pact promises to unite the plastic supply chain to...

Dow and Shell claim progress in development of low-emission crackers

Multiversity NSW and the future of STEM