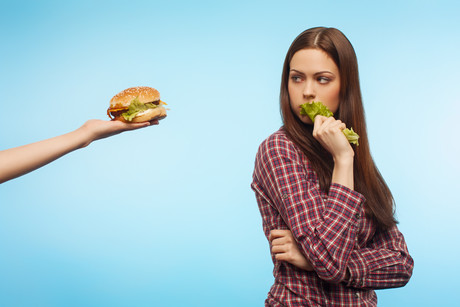 Salad is not always the most popular food choice, but a recent survey found that 99% of salads served alongside takeaway food are thrown away.

It is understandably difficult to find appeal in a wilted bag of lettuce when it’s next to a favourite takeaway curry, but apart from the appearance, there are a number of reasons why consumers avoid it.

A survey by UK waste management company BusinessWaste.co.uk found that takeaway salads are wasted because consumers are concerned about food safety and cleanliness. This stems from the assumption that it is uncooked and prepared in unsanitary conditions which encourages the spread of bacteria, with survey participants stating "they don't wash it" and "I might get food poisoning off it".

"A plastic bag's probably not the best way to present a salad, to be honest," said BusinessWaste.co.uk spokesman Mark Hall. "Customers have a mental image of the food being stuffed in there by bare hand, which it most certainly isn't. But it's a hard image for most people to shake."

After asking 3500 people at several locations in the UK what they did with free salads that accompanied curries or kebabs, the researchers found that thousands of tonnes of food was being wasted unnecessarily.

Ultimately, all of these salads ended up in landfill, as 94% threw unopened salad in the bin, 1% stored it in the fridge only to discard of it at a later date and 6% left it in the shop or gave it back to the delivery person. Most shockingly, nobody reported eating takeaway salad.

"We tried to find out who eats these salads, and we found literally nobody prepared to confess that they did," said Hall. "In our opinion, they're nothing but a huge waste of food."

The company found that public bins in close proximity to these takeaway shops were filled with salad, and suggested it may be one of the biggest contributors to Britain's food waste.

BusinessWaste.co.uk said that a "simple solution" would be if takeaways asked the customer if they would like salad included, rather than just assuming. Hall explained that this would limit food waste — and the plastic bags used to contain the salad — and result in cost savings for food establishments.

This may be one of the only times that consumers are encouraged to avoid the healthier option, but in the interest of conserving resources, Hall said "... in this case, our message is loud and clear — say 'NO' to salad!"

Sun safety sensor lets you know when you've had too much

Russia approves COVID-19 vaccine — but is it safe?