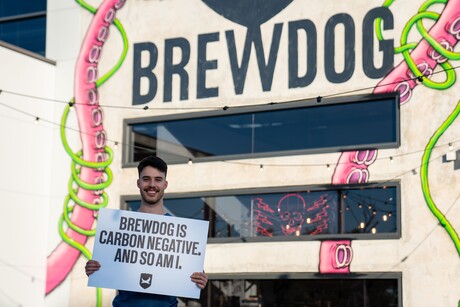 Scottish craft brewer BrewDog has announced a new plan to ensure all its staff will be carbon negative.

BrewDog introduced an employee perk where all staff around the world, including those at Brisbane’s brewery and taproom, will be required to calculate their carbon footprint via the Pawprint platform, which enables them to understand their impact on the planet.

The brewer has also committed to offsetting the carbon pawprints of its employees’ dogs to help staff understand that everything has a carbon footprint and impact on the environment.

BrewDog will then calculate its entire team’s footprint and remove twice as much carbon from the air each year than what the team is responsible for.

BrewDog co-founder James Watt said the company was proud to be one of the first businesses to offset its employees and their dogs’ carbon footprint.

“Our commitment to sustainability is an integral part of our business across our entire operation, and means BrewDog both as a company and as individuals are having a massively positive impact on the planet and helping drive the change that our world so badly needs,” Watt said.

The announcement came after the company unveiled an AU$55 million climate action program. Locally, this will see the company add solar panels to supply a significant amount of the energy demand from the brewery, taproom and restaurant, and provide all spent grain to feed local cattle in Queensland.

The industry plans to reach net zero carbon emissions by 2050.