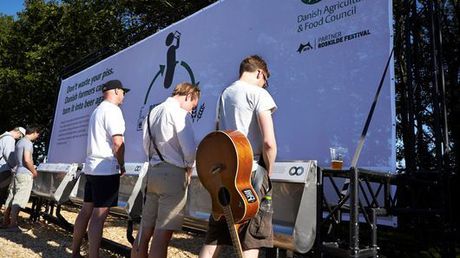 If everything goes to plan, guests at the music festival Roskilde 2017 will be served beer made from barley fertilised by the urine collected at Roskilde 2015.

This ‘Piss to Pilsner’ initiative involved the collection of 25,000 litres of urine from more than 100,000 festival goers last week.

The ‘contributions’ from the urinals were collected in specially designed storage tanks, which have been transported to nearby fields to fertilise malting barley for brewing beer. Women were encouraged to ‘contribute’ as well using free cardboard ‘P-Mate urine directors’ that were handed out.

“It’s about changing our approach to waste, from being a burden to being a valuable resource,” said Leif Nielsen from the Danish Agriculture & Food Council (DAFC), which is partnering with festival organisers to promote ‘beercycling’.

“The huge amount of urine produced at festivals was having a negative impact on the environment and the sewage system,” said Nielsen. “But beercycling will turn the urine into a resource.” He’s confident that the project will be a success. “I think most people can see the reason and the fun behind making a personal contribution to beer brewing, and the fact that rock music is involved will help us get our message across.”

Headline acts at this year’s festival included Florence and the Machine, Pharrell Williams and Sir Paul McCartney — big-name stars who organisers hope will contribute to the initiative. “We’ve got urinals right next to the stages where the acts will play, so we’re hoping to collect some rock star pee as well,” said Marie Grabow Westergaard from the DAFC.