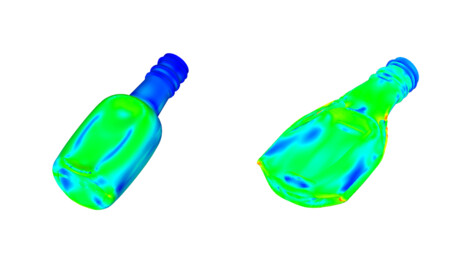 Amcor Rigid Packaging has developed a simple method of increasing the recyclability of tiny bottles that usually fall through the cracks and end up in the garbage.

Small 50 mL bottles, such as the ones used to serve alcohol in planes and hotel fridges, often make their way into the garbage instead of the recycling because they are too small to be easily isolated within recycling facilities. This is despite the bottles being composed of recyclable material.

The problem is that, in essence, the bottles are too small to be adequately sorted and end up being disposed of with broken glass. Billions of these bottles are sent to landfill each year because of this simple but concerning situation.

The solution to this issue was discovered by Amcor, whose engineers were trying to find ways of preventing these bottles ending up where they shouldn’t be. When testing the collapsibility of the bottles it came to light through a simulation that if these small bottles are altered such that they collapse in a specific way — with a collapsed width of 5 cm — they become easier to capture for recycling and fewer of them fall through the cracks.

Amcor is now testing new bottles that have specifically engineered failure points that cause this ideal form of collapsing. If the testing proves successful and the new bottle design is widely instituted, the change has the potential to result in many bottles ending up with other PET bottles and recycled instead of being sent to landfill.