A partnership of Australian and global leaders in environmental engineering has been chosen to provide an extended wastewater treatment system for Pacific Beverages’ new Bluetongue brewery in New South Wales.

CST Wastewater Solutions is partnering with Global Water Engineering (GWE) to deliver and install a treatment system with best-practice water re-use standards, while at the same time providing renewable energy for the brewery, reducing its dependence on fossil fuels. 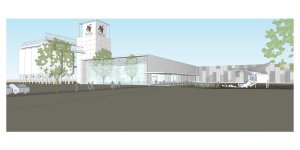 The $120 million brewery now being built on NSW’s Central Coast will eventually have an annual capacity of 150 million litres, making it the state’s second largest. Pacific Beverages - a joint venture by Coca-Cola Amatil and global brewer SAB Miller - has ensured the brewery will boast strict environmental standards and world-class water and energy savings.

The brewery’s wastewater will pass several pre-treatment steps before entering a GWE Anubix-B anaerobic methane reactor in which the wastewater’s organic content (COD) is digested by bacteria in a closed reactor, degrading the compounds and converting them into biogas and cleaned effluent.

This anaerobic treatment will significantly reduce the brewery’s carbon footprint by avoiding the release of carbon dioxide into the atmosphere.

Biogas from the process will be collected and re-used as renewable energy to power the brewery’s boiler.

Treated effluent will then continue to an aerobic post-treatment stage in which organic content is further reduced by GWE’s Membrox Membrane Biological Reactor (MBR) system.

In the water polishing step, the water from the MBR unit is sent through a reverse osmosis (RO) installation. Finally, the effluent is led to a disinfection and storage unit where the recycled water is kept for re-use applications.

Michael Bambridge, Managing Director of CST Wastewater Solutions, said: “Environmental initiatives such as green energy generation from wastewater treatment do not always get as much attention in Australasia as the more traditional renewables, such as solar and wind. In fact there is a huge, often hidden, potential in using wastewater as a source of renewable energy. Global Water Engineering (GWE) encourages businesses with organic content in their wastewater and waste streams to investigate the anaerobic potential for their specific case. The technologies involved are highly applicable to Australia and New Zealand.”

The CEO of Pacific Beverages, Peter McLoughlin, says, “Environmental sustainability and employment opportunities are two very key aspects that Pacific Beverages has prioritised through the planning of the new Bluetongue Brewery in Warnervale. We are determined to meet and exceed the expectations of the local community, our customers and consumers in creating a truly world-class brewery that is environmentally friendly both in construction and post commissioning. Partnerships with companies such as CST Wastewater Solutions and Global Water Engineering will help us to succeed in meeting these objectives.”

Bluetongue was founded in 2003 by four Hunter Valley entrepreneurs to create premium handcrafted Australian beer with the stamp of their local region. In 2007, Pacific Beverages acquired the brewery and its stable of beers, including Bluetongue Premium Lager, Bluetongue Traditional Pilsner and Bondi Blonde. Construction on the new brewery began in December last year, when NSW Premier Nathan Rees turned the first sod on site at Burnet Road, Warnervale, exactly a year to the day after Pacific Beverages acquired Bluetongue.

Why do some people develop life-threatening COVID-19?