In the US state of Pennsylvania, Snyder’s of Hanover has begun construction on a solar farm that will include 15,000 panels spanning 10.5 hectares. The system is projected to produce 4.2 million kW hours of electricity per year, supplying approximately 27% of the company’s energy needs. 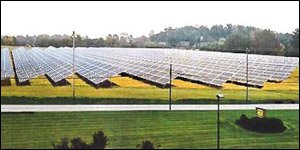 It is claimed that the solar farm will reduce greenhouse gas emissions by more than 105,000 tonnes of carbon dioxide over a 25-year period. As a comparison, the energy created from the solar field equals more than 178 million kilometres not driven by a medium-sized car, and more than 11 million trees would need to be planted to equal the same level of carbon-dioxide reduction.

“We are always looking for ways to be a greener and environmentally friendly company and the solar farm is an important step. The solar field joins other Snyder’s of Hanover sustainability initiatives including compostable packaging, and takes the company one step closer to achieving our five-year sustainability goals established last year. It demonstrates that we can still be passionate about pretzels and better-for-you snack foods while caring for our environment,” said Carl E Lee, Jr, president and CEO of Snyder’s of Hanover.

The global leader in pretzels and the US’s second largest snack food company, Snyder’s of Hanover was founded in 1909 and is a privately held company that employs over 2250 associates and operates nearly 1900 distribution routes nationwide.

Snyder’s is headquartered in Hanover, PA, also the location of its flagship snack food manufacturing and distribution centre where products are produced and distributed to the eastern half of North America, the Caribbean, Central and South America, and Europe. The Goodyear, Arizona plant produces products for the western half of the United States and Pacific Rim countries. The Jeffersonville, Indiana ‘Krunchers!’ plant produces and distributes Krunchers! kettle potato chips, Jays potato chips, and Grande tortilla chip products primarily for the Midwestern, Central, and Eastern United States.