Saving energy during decaffeination at Kraft 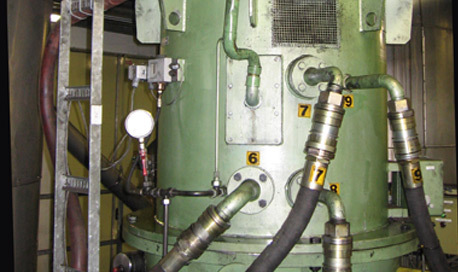 The food producer Kraft has converted its decaffeination pumps in Bremen, Germany, to variable-speed operation.

Kraft has been producing decaffeinated coffee at its site in Bremen/Holzhafen for many years. Production is based on a process in which the caffeine is removed from the coffee beans under high pressure with carbon dioxide. Four high-pressure pumps at the site press the CO2 through the coffee at 250 bar. Until recently, these pumps were operated by 10 kV high-voltage motors with a power of 650 kW.

Decaffeinated coffee is made by extracting the caffeine from the still green and unroasted beans by a solvent. The aim is to remove the caffeine without removing too much of the flavour from the beans. At the same time, no residue of solvent may be left behind in the coffee.

A gentle process that is used especially for the production of high-quality and aromatic decaffeinated coffee is the carbon dioxide (CO2) method that Kraft also uses for decaffeination. Here, coffee beans pre-treated with steam are rinsed at a pressure exceeding 200 bar with supercritical CO2 to extract the caffeine. The caffeine is then extracted from the CO2 in a carbon filter. The caffeine-free CO2 can then be recycled into the process.

The goal: 30% reduction in energy costs

Approximately three years ago, Kraft introduced a company-wide, energy-saving program with the goal of reducing energy costs by 30% through modernisation. One of the guidelines was that priority should be given to measures whose costs could be amortised in three years or less.

The electrical drives in the decaffeination plant were examined in this context. Kraft collaborated with Siemens on this analysis. The expected savings potential was demonstrated effectively on real examples by using the SinaSave software.

The analysis and a thorough factory inspection identified the four high-voltage drives as a suitable starting point. The key measure of the retrofit project was the changeover of the decaffeination pumps from a combination of fixed-speed drive and hydraulic adjustment to an electric variable-speed drive with frequency converters. Unlike traditional control methods in which the motor always runs at the speed designed for the maximum flow volume and the excess flow volume is throttled by mechanical means such as throttle valves, drive systems with frequency converters adapt the speed and therefore the energy consumption to current operational requirements. The energy savings potential is particularly high in flow machines such as pumps because here the power consumption is proportional to the cube of the speed.

In the course of the modernisation project, the high operating voltage was also to be adapted to 690 V, which is normal for the given power range today, and the wiring of the new motors was to be optimised for easier maintenance. In the future, continuous operation of the pumps at very low speed was also to be possible, to preserve the pump shaft seals.

The speed of the decaffeination pumps was controlled by hydraulic couplings before modernisation.

A new adapted system consisting of a transformer, Sinamics G150 frequency converters and low-voltage motors of the N-compact series was suggested as an energy-saving alternative.

The Sinamics G150 cabinet converter devices are specially designed for individual high-power drives that require no mains feedback, for example, pump drives. Sinamics G150 devices are highly reliable, quiet, compact and user friendly - and economical, from planning right through to service. The robust, low-maintenance, low-voltage, N-compact motors feature small power-related dimensions and high efficiency. The comparative value of the previous pump drive was determined for the new drive system, and the motor was dimensioned accordingly.

A two-pole 1LA8 motor with an output of 485 kW in converter mode with 690 V is now used in Bremen. With this choice of motor, all the parameters for safe operation are satisfied and a power reserve of 11% is installed. The power reserve allows safe operation of the motor even on hot summer days when the temperature in the production halls rises above 40°C.

The solution with the Sinamics G150 frequency converters also offers numerous advantages for this particular application with regard to simple integration into the plant and a system that is as maintenance friendly as possible. These converters have drive-internal block transformers, so no special conversions were necessary on the high-voltage switchgear. The mains choke in the input to the frequency converters was omitted as well.

The combination with the Geafol cast-resin transformers allows a flexible choice of installation sites for the transformers and ensures maintenance-free operation. Based on real operating values with the old drives and the nominal data of the motors, which all had to be designed identically with a view to spare parts stocks, the project team finally carried out a precise calculation of the cost-effectiveness. This analysis revealed that the amortisation time for the conversion of all four drives would be approximately three years and therefore within the time frame for energy-saving measures at Kraft. The project could therefore be implemented.

Thanks to the compact dimensions, the new converter cabinet could simply be installed in an existing cavity near the drive, allowing short motor cables to be used. The wiring layout was chosen so that maintenance work can be carried out in the future without disconnecting the cables. This considerably reduces set-up times.

Several special mechanical measures were necessary for the connection of the motor. The connecting flanges of the old hydraulic coupling were designed identically at the input and output and adapted to the axle height of the old 10 kV motors. The axle height of the new 1LA8 motors is lower due to the much lower power. This problem was solved with an adapter flange that has the dimensions of the hydraulic coupling on the pump side and the dimensions of the new 1LA8 motors on the motor side. This avoids further conversions to the units.

After the conversion: the new drive system features reduced set-up times and much lower energy consumption.

Step by step from idea to realisation

Initially, only one conversion, namely that of the drive for the HE1 pump, was ordered. The decision as to whether to convert the other three pumps was to be made later, based on operating experience with this first pump. The operating values were measured regularly after conversion.

After the pump had been in operation with the new drive concept for approximately six months, it became evident that the new device fully met all expectations. The successive conversion of the other three drives was then ordered.

The idea of the operation managers to have the pumps run at very low speed in ‘nonoperation’ to prevent the shaft seals from sticking was also implemented with no great effort by using the converter drives. This should prolong the life of the expensive seals and reduce the associated replacement costs.