Minimising the power consumption of industrial and commercial processes is gaining increased focus with rising oil and coal prices, as well as impending emission trading systems in Australia and elsewhere. The power consumed by large industrial refrigeration plant often makes up the major portion of site power used on refrigeration-intensive sites, such as food processing plants.

Many large industrial facilities that require refrigeration have been constructed, even until recently, with the design focus on functionality and installed cost - often with little regard for the cost of power.

This article outlines the design and control aspects of industrial refrigeration plants that lead to reduced energy efficiencies, how these aspects are quantified, and the measures that are available to improve the system efficiency.

The energy-efficiency equation is substantially complicated by issues such as heat recovery and the carbon cost of power. The latter aspect varies widely, depending on the degree of renewable energy available.

The energy efficiency of any refrigeration plant is fundamentally influenced by two basic parameters:

Design decisions that have a substantial influence on plant power consumption are many and varied, but typical examples include:

Under- or over-sizing of components can reduce efficiencies in many ways. However, even the best designed refrigeration plant can perform poorly if the control system is too basic for the task. In many cases, especially where the plant experiences frequent load changes or load combinations, compressors can run inefficiently or even unnecessarily. Considering the large drive motors used in industrial applications, a 380 kW motor, for example, is a major operational cost if it runs more than it is really needed.

Common control issues that lead to excessive plant power use include: 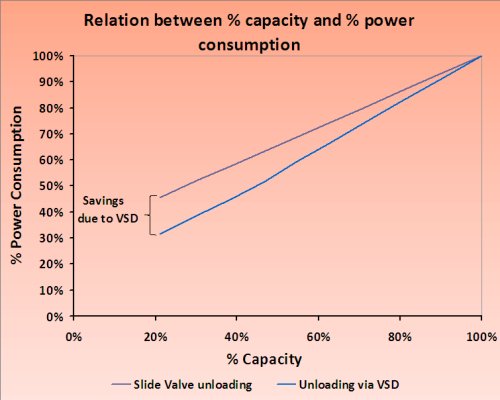 Industrial screw compressors conventionally reduce in cooling capacity (unload) via their slide valve. Slide position is approximately representative of the refrigeration capacity of the compressor.

On plants with multiple operating compressors, usually installing a VSD on one compressor and staging the other compressors to run above 75% slide valve capacity provides energy-efficient operation.

In a two-stage refrigeration plant, if the inter-stage pressure is set too low or too high it results in a reduced overall energy efficiency of the plant. 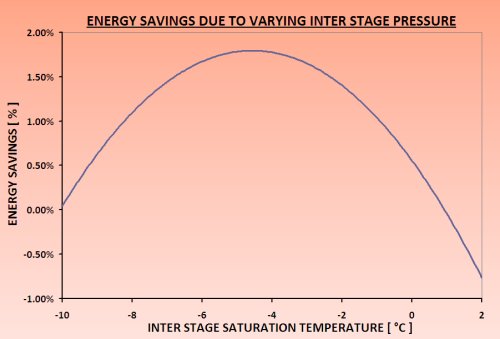 Refrigerant liquid (condensate) generated in the condensers of a refrigeration plant is generally at saturation conditions and is not sub-cooled prior to being fed to the low temperature vessels of the plant. By sub-cooling the liquid past the saturation point, system efficiency is increased due to reduced flash gas. Town water that is supplied to the heat rejection devices (water-cooled plants only) can be used to sub-cool the refrigerant liquid.

Figure 3 illustrates the improvement in efficiency (coefficient of performance or COP) of the system due to condensate sub-cooling by town water. As indicated, the amount of efficiency improvement depends on the town water supply temperature and the condensing temperature of the plant. 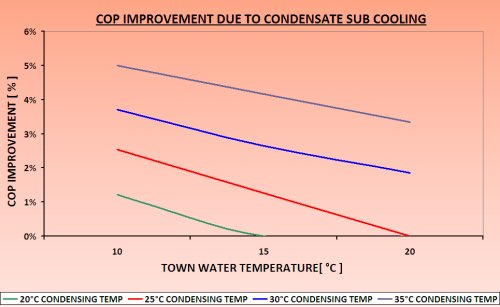 Monitoring of the plant is an excellent starting point to quantify the amount of energy savings possible on an industrial refrigeration plant. Monitoring of compressor motor power, suction pressure, discharge pressure and the slide valve position of the compressors is sufficient to quantify energy savings if the production profile is known. A two-week monitoring period will capture most variations in capacity of the plant. In many instances, weekday operation could be vastly different from weekend operation, with compressors running substantially unloaded on weekends.

Data logging can be done via the plant PLC/SCADA system or with specialised logging devices. Once the logged data is collated, a set of calculations are done which will determine any possible annual energy savings on the plant.

Based on analysis of the monitored data and conducting detailed calculations, the next step is to determine the measures needed to be taken to achieve these savings. Any or all of the following measures could be taken.

Apart from the above, a thorough design review of the refrigeration plant usually leads to the identification of site-specific design- and control-related issues that lead to overall plant inefficiency, such as incorrect air purging arrangement or under-sized suction/discharge lines, and so on.

Many of the abovementioned energy-efficiency measures require the definition of control algorithms with various input parameters, and the initial implementation may not yield the desired results. Suitably optimised control logic would yield better results, especially if the critical parameters are regularly observed and optimised.

How a refrigeration consultant can help

In many cases, it helps to engage the services of a specialist refrigeration consultant to help determine the appropriate strategy for increasing the efficiency of the refrigeration system. A competent and suitably qualified consultant can assist with the following:

There may be government energy-efficiency initiatives that can help in funding your refrigeration efficiency improvements. For example, in NSW, the Department of Environment, Climate Change and Water (DECCW) has established the Industrial Refrigeration Energy Efficiency program which aims to promote the widespread adoption of the abovementioned measures throughout the industrial refrigeration sector in NSW where site electricity consumption is less than 10 GWh/year. Industrial refrigeration specialists have been appointed by DECCW under this program to identify energy-saving technologies specific to each site and to develop business cases. Business cases studies can be subsidised by 70% of the actual cost of the study and provide the participating firms with a detailed report on investigation into the cost-effective, energy-efficiency measures that could be adopted. In addition to the above, at the discretion of DECCW, the program would potentially fund 100% of the engineering and project management costs during implementation and 30% of actual implementation costs up to a maximum of $20,000.