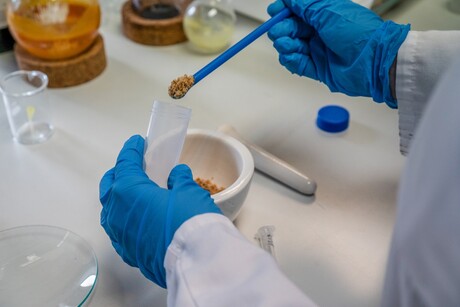 Spanish researchers have now developed a new device that enables the fast detection of gluten through a simple signalling process — and they believe it could be the basis for developing portable, fast, sensitive and simple systems to monitor gluten in food.

Close to 1% of the worldwide population suffers from coeliac disease, a complex and autoimmune disorder caused by ingesting gluten. Detecting gluten is a key element for coeliac patients to keep the disease under control, while the food industry is obliged to declare its presence in food.

Ramón Martínez Máñez, a Professor at Polytechnic University of Valencia (UPV) and Scientific Director of the Biomedical Research Networking Center in Bioengineering, Biomaterials, and Nanomedicine (CIBER-BBN), is working on developing intelligent methods to detect gluten, to prevent the accidental ingestion of this protein and fight against fraud in the food industry. He and his team have now developed a novel biosensor, described in the journal Analytica Chimica Acta.

“The biosensor is comprised by nanoporous anodic alumina films loaded with a fluorescent dye and capped with an aptameter (a DNA or RNA molecule) that specifically recognises gliadin, gluten’s soluble protein,” said study co-author M Carmen Martínez Bisbal, a Professor at the University of Valencia (UV) as well as researcher at the CIBER-BBN and Interuniversity Research Institute on Molecular Recognition and Technological Development (IDM UPV-UV).

“In the presence of gliadin, the aptameter moves from the surface of the biosensor, resulting in the pores opening and the signalling dye being released,” added study author Sara Santiago-Felipe, a researcher at the CIBER-BBN and IDM UPV-UV.

The sensor has been validated in real food samples, making it possible to detect gluten via a simple signalling process, with great potential to be used in food control. Study author Luis Pla, a researcher at the CIBER-BBN and IDM UPV-UV, said, “We have confirmed that it has a detection limit of 100 µg kg-1 of gliagin, good selectivity and a detection time of 60 min.”

“Our results can be the basis to develop portable, simple, fast and sensitive systems to detect gluten, which can be easily adjusted by using different molecules, providing great potential for allergen tests,” Prof Máñez concluded.