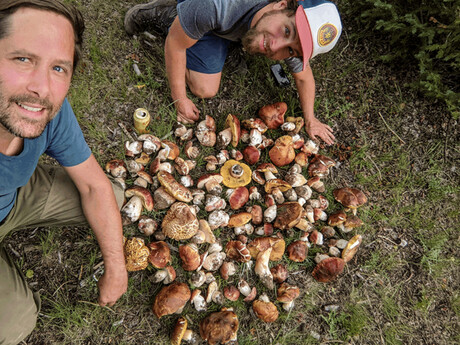 A recent US study tested up to 16 packaged food products that listed “wild mushrooms” on their labels. The researchers revealed that the products mostly contain cultivated fungi, and even a few poisonous mushrooms in one product.

Harvesting wild mushrooms requires an expert eye to distinguish between the delicious and the inedible. Misidentification can have a range of consequences, from a disgusting taste and mild illness to organ failure and even death.

Food products that tout ‘wild mushrooms’ as ingredients are often vague and non-specific, making it impossible to know if the products are truly wild or just cultivated varieties, or even if they contain poisonous mushrooms harmful to humans.

The United States has minimal regulations around the harvest and sale of wild fungi.

Researchers from the University of Utah (U) and the Natural History Museum of Utah (NHMU) used DNA barcoding techniques in their wild mushroom label study to test a variety of products such as soups, dried mushrooms, powdered mushrooms, pasta sauces and flavour enhancers that were sourced from local grocery stores around Salt Lake City, Utah, and a large online retailer.

They found 28 species of mushrooms across all 16 food products. Almost all products that claimed to have wild mushrooms consisted of cultivated species, including oyster, shiitake or portabella mushrooms. Only five products had contents that were accurately described on the label, and some included species that likely have yet to be described in academic literature. One packet of dried wild mushrooms from the online retailer contained a species from a group of fungi that includes the “Death Cap,” a notoriously poisonous mushroom known to cause renal failure in humans.

The authors contacted the online retailer to inform them of the potential dangers of the product but as of the paper’s publication, the authors' said the dried mushrooms were still on sale.

Alexander Bradshaw, co-author of the study and doctoral student at the U said there’s an ignorance about mushrooms in general and the exact definition for wild mushrooms.  “One package of dried mushrooms said it contained porcini, defined by a characteristic spongy texture underneath the cap. Just by looking at it, we knew it was untrue — the mushrooms had gills underneath their caps. It seems like if you can dry it down, you can just slap a porcini label on it.”

The authors said their results are inevitable partly because policies that regulate the international food supply chain vary wildly. Some parts of Europe require a license to collect edible wild mushrooms, but the guidelines differ between countries. In the US, state governments are responsible for regulating commercial wild mushrooms sales, but only 31 states have any regulations at all, according to a National Survey of State Regulation of Wild Mushroom Foraging for Retail Sale.

In Australia or New Zealand, any mushrooms provided for retail sale must comply with relevant standards in the Australia New Zealand Food Standards FSANZ Code. The specific safety rules, regulations and standards applicable to mushrooms will depend on the species of mushroom. Mushrooms that have not been traditionally consumed as a food in Australia and New Zealand may be considered a novel food and therefore will require pre-market approval.

Another reason for inconsistencies is because the field of mycology is vastly understudied.

“About 95% of fungal species on Earth are undescribed. Fungi are so poorly documented, how do you regulate something that is virtually unknown?” said Bryn Dentinger, senior author of the paper, curator of mycology at the Natural History Museum of Utah, and associate professor of biology at the U. “This puts human health at risk, but it also puts our ecosystems at risk. Around the world, unsustainable harvesting practices could put rare and threatened species at risk of extinction.”

Many food producers opt for common fungi that can be cultivated easily and grown in large quantities, such as oyster, shiitake, and portabella mushrooms. But there are still safe ways to enjoy wild mushrooms, the researchers say.

The study published online in the journal Peer J Life & Environment on 2 August 2021.

Researchers have developed a method of printing and cooking food using blue lasers.

The methodology can be used to analyse the flavour profile of cocoa from any point in the supply...

US scientists are investigating solutions to lower the risk of disease-causing bacteria which...