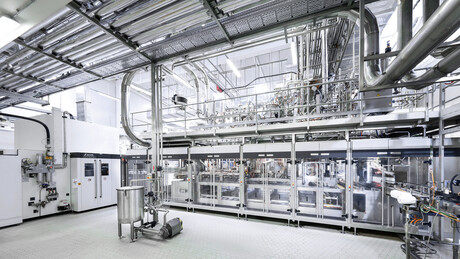 After a fire destroyed much of the equipment in its factory, Serbian milk producer Imlek turned to KHS to replace some of the machinery that it had lost.

The two companies had worked together previously and despite the massive loss, though thankfully only of machinery and not life, the milk company was eager to work with KHS once more, who was able to help rebuild the operation through furnishing of updated machinery and a bespoke solution.

KHS was able to meet Imlek’s needs through the introduction of its InnoPET BloFill ACF-L block system, which is composed of a stretch blow moulder and an aseptic filter. This combination was a first for KHS and presented some obvious positives that benefited the milk company’s new factory. The combined block is more powerful than the filler the company had previously been using but was also more sustainable and economical, using up to 40% less energy.

To allow the two machines to work in tandem, a special transfer module was designed that joins them together and feeds the continuous PET bottle flow from the rotary stretch blow moulder to batch processing on the linear filler. Ten consecutive containers at a time are taken from the bottle flow, accelerated and then separated from the following units as a group.

This means that they can be easily removed with grippers and placed in the filler’s carrier plates to be used in that machine. Additionally, this combination saved space and energy because there is no need for an air conveyor. With the new equipment, format change times and filling volume accuracy both benefited as well.

The platform’s modularity means that the machinery has room for further expansion in the future, should items like foil sealers and dosing units for fruit chunks be required. A shrink packer that survived the fire was also added to the machinery line-up, allowing the dairy to prepare its bottles for shipping.

With the machinery in place, Imlek is back producing its dairy products as before with high levels of production, filling over a million litres of milk a day.