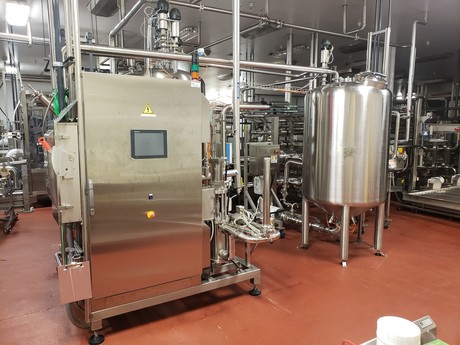 US soup and sauce manufacturer Ready Foods has reduced the time it takes to chill its meat marinade by a third using a turnkey cooling system from HRS Heat Exchangers.

Ready Foods is a cook and chill company that manufactures soups and sauces for restaurants and the meat industry. After receiving a large order for one of its meat marinades from a leading chain of quick-service Mexican restaurants, the company needed to increase capacity. The existing process of kettle cooking and steaming the marinade then chilling it in 5 lb pouches in a water cooling system for three hours would not allow Ready Foods to meet the customer’s increased demand for 2000 lb totes.

Marco Antonio Abarca, President and Owner of Ready Foods, and Greg Hefter, Plant Engineer, set out to find a suitable cooling system that would enable the company to decrease the length of time it took to cool the marinade from 200 to 38°F (about 93 to 3°C) and increase production levels.

“We are a medium-sized company but it became clear that most of the equipment suppliers were accustomed to dealing with much larger firms than ours; their proposals were totally unsuitable for our size of operation,” Abarca said.

“Some recommended systems which required a large footprint or a 20-foot ceiling height; others could only supply one or two parts of the solution and expected us to source the rest and integrate it ourselves; while some showed us systems which were far too complex and sophisticated for our operatives to use,” Hefter added. “We don’t have the luxury of a team of engineers on call 24/7, so any system we chose had to be simple to operate and straightforward enough for our mechanics to take care of.”

Abarca and Hefter sent two versions of the marinade to HRS for testing, one very thin and one concentrated form of the product.

In 2017, Ready Foods’ client opted for the thicker product and chose glycol rather than R-404 refrigerant as the cooling medium.

HRS’s turnkey solution for Ready Foods comprises: a transfer pump to move the product from the cook kettles into the balance tank; a balance tank to receive and mix both recycled and new incoming product; a BP-6 hydraulic pump to push product through the system; a pre-cooler, consisting of 10 AS Series triple-tubes as the pre-cooling exchanger, which cools the product using chilled water; the final cooler, comprising two Unicus scraped surface heat exchangers; and a three-way valve which sends product into the filler tank or back to the balance tank, depending on whether the temperature requirement is met or the filler tank is too full to receive product.

HRS also supplied auxiliary equipment, including a cleaning-in-place (CIP) system and a steam-powered hot water set to prevent freezing in the event of a production halt (also used to heat the solution during the automated CIP program).

“The product is very viscous so being able to clean the scraped surface heat exchanger was vital,” Creech said. “The CIP cabinet and system incorporate a centrifugal CIP pump installed alongside the BP-6 pump. This ensures the correct velocities are met, keeping the entire system clean and hygienic.”

Abarca said the cooling system has significantly increased the volume of product Ready Foods is able to produce, reducing the marinade chilling time from three hours down to one hour.

The integrated system boasts a small footprint and has been designed to accommodate Ready Foods’ large proportion of Spanish-speaking employees. HRS incorporated a feature on the main page of the program which allows the controls to be switched between English and Spanish.

“It normally takes a long time to integrate a system into a factory and that’s what I was expecting here, but that has not been the case. The cooling system has evened out the playing field by allowing a medium-sized company such as ourselves to compete with the larger firms. Not only that, but it’s the type of technology which suits a lot of applications. We are using it to make a meat marinade, but the reality is that we can do anything with it," Abarca said. "The HRS cooling system has set the bar for us."

Top image: The cooling system has cut the time it takes Ready Foods to chill its marinade by a third.

Recently launched in Australia, the DA6200 low-cost NIR analyser has been approved by AUSMEAT for...

A manufacturer of bag-in-box filling systems, TORR Industries is now working with Auspouch to...