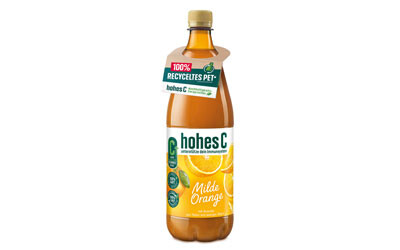 European beverage company Eckes-Granini has switched to 100% recycled plastic (rPET) bottles for its hohes C juice 1 L range. KHS’ Bottles & Shapes experts in Hamburg have optimised the bottles, which will continue to be produced on its InnoPET FreshSafe block.

Back in 2018, Eckes-Granini started using 25% rPET for its PET juice bottles, but a recent push in the industry towards plastic reduction made the company strive for 100% rPET.

“Bearing the EU’s plastic strategy in mind and the increase in recyclate quotas this prescribes, we’ve now decided to switch to using recycled PET only. We want to be a pioneer as regards the circular economy and set a good example for the beverage industry,” said Hermann Naumann, plant manager for Eckes-Granini in Bad Fallingbostel in Lower Saxony.

The changeover of the one-litre hohes C bottle to rPET is planned to save more than 4000 metric tons of new PET per year, and as a result the bottler could cut its annual carbon emissions by about 8000 tons.

Saving resources was not the only focus of the project. The ability to do so on the KHS InnoPET FreshSafe block, which has been in operation at Eckes-Granini since 2017, also had to be investigated. 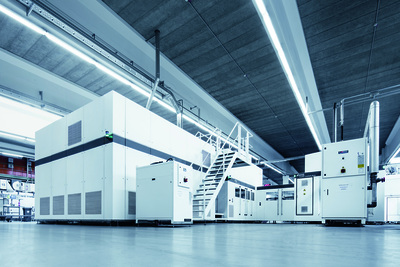 An InnoPET FreshSafe block from KHS has been in operation at Eckes-Granini since 2017.

“One of the concerns was whether either the preforms or machine needed adapting,” said Dr Matthias Kruse, head of PET Technology at KHS.

“We thus assessed the quality of the recycled PET material. This is crucial, for large variances in colour, molecular length and inhomogeneity quickly reduce the efficiency of production.”

The fact that Eckes-Granini procures its preforms from two different suppliers presented an added challenge, Kruse said. The geometry of the preform is essential for efficient processing, especially when a high percentage of rPET is used. Through extensive testing it was established that both makes of preform function soundly on the block system. All that was needed for optimum bottle production were minor adjustments to the heater on the stretch blow moulder.

KHS said its near infrared technology (NIR) provides a wide processing window for rPET, allowing preforms to be heated prior to the stretch blow moulding process with accuracy, for example. No major changes to the machinery or geometrical properties of the preforms were required. “This enabled us to achieve a very high level of process efficiency while retaining the container quality, thus fully meeting our customer’s requirements,” Kruse said.

KHS said the beverage company will also continue to benefit from FreshSafe PET barrier protection after converting to 100% rPET. The oxygen barrier of chemically pure glass, a wafer-thin coating on the inside of the PET bottle, not only protects the juice from oxygen pickup but is also fully recyclable. The coating can be easily washed off the bottles during the recycling process. The packaging alternative therefore permits pure-grade bottle-to-bottle recycling.

By the end of 2022, Eckes-Granini Deutschland intends to only use PET bottles made entirely of rPET for all brands, which will save approximately 9000 metric tons of new plastic per year.

The models in this refrigerant dryer series keep a constant dewpoint and can operate in a range...

This machine can be used for cutting, mixing and emulsifying and has an integrated AC drive for...