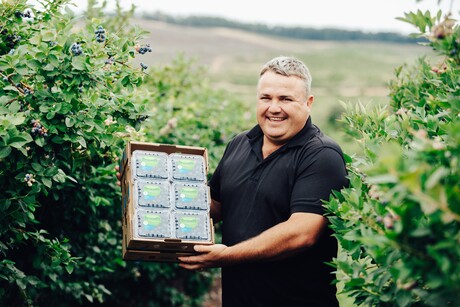 Australian berry producer Driscoll’s has announced its move towards organic farming. The company now offers Australians ‘organic in conversion’ blueberries through to mid-February. But what is the difference between organic and organic in conversion and how long does it take to become certified?

Nico Mulder is the farmer behind the first organic berry range from Driscoll’s. He grew up on a farm in South Africa and has been a professional farmer for 20 years. Nico has proudly farmed Driscoll’s’ blueberries for seven years in the little Snowy Mountains town of Tumbarumba, NSW.

Driscoll’s General Manager Jon Gleeson said the company is extremely proud of Nico for making the move to organic.

“Nico has employed more staff to account for increased weed spraying, invested in expensive certified organic soil inputs, implemented and invested new composting processes, and that’s not the half of it,” Gleeson said.

While the farm will not be fully certified for a couple of years, he has already implemented these measures and yielded his first organic-in-conversion crop.

“We think it’s important people are aware of the term ‘organic in conversion’ so they can make healthier, more sustainable choices and support farmers like Nico who have dedicated to this transition for the betterment of the planet,” Gleeson said.

It takes three years for primary producers to be able to advertise their product as fully organic certified.

The business must be managed in accordance with one of the six Australian organic certification bodies, which are underpinned by the principles by Australia’s organic guidelines.

After submitting an application, the certification body will arrange an initial audit. When the audit report has been reviewed and the farm has been ‘pre-certified’, a date for a second audit will be set. During this time, produce can only be sold as conventional.

After the success of the second audit, the producer will be offered a contract with conditions that allow the product to be sold as ‘in conversion’.

According to Southern Cross Certified, Driscoll’s’ organic certification body, in-conversion producers have stopped using pesticides or prohibited substances but don’t have a full A grade status because the farmland needs time to leech itself of previously used substances.

If the operator is inexperienced in organic management systems, they must undergo a 12-month supervision period by an accredited certifying agency to ensure a workable conversion plan is in place.

After two more successful audits by the certification body, the produce can be sold as ‘certified organic’.

Plan for the future

Driscoll’s said it desires to further decrease its impact on the natural and social resources its communities depend on, and rapidly increasing consumer demand for organic produce has driven this move.

The company aims to have an organic berry offer across all four Driscoll’s berry types — blueberries, blackberries, raspberries and strawberries — in the coming years.

There are many factors to consider when evaluating the metal detector inspection technology.

SMC to showcase at Foodtech Packtech 2021

SMC will launch its latest campaign entitled 'Smart Steps to Flexible Manufacturing' at...

Better Juice is collaborating with GEA Group to scale up its sugar reduction technology, which is...