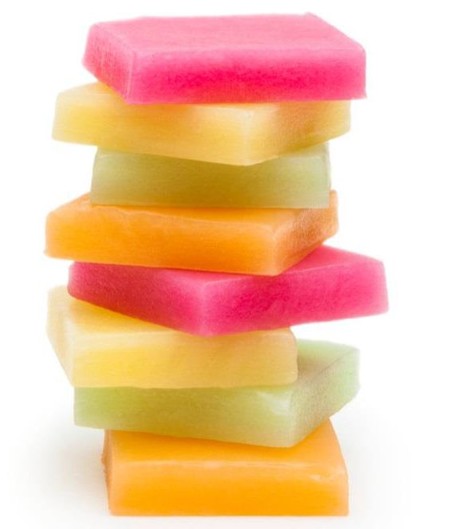 Wacker Chemie has launched a completely new confectionery manufacturing technology that turns a chewy lolly into chewing gum after a short time. The confectionery is made in a boiling process so water-based, fat-containing and natural ingredients, such as fruit juice, cocoa and coffee, can be added to the lollies.

The chewing of gum-like substances appears to always have been a basic human need. Archaeologists found the oldest specimen to date of a precursor to chewing gum when they excavated a 9000-year-old settlement in southern Sweden. The ancient Greeks were also fond of similar substances. Some 2000 years ago, they chewed on the resin of the mastic tree, which is still harvested on the Greek island of Chios. Nowadays, chewing gum is generally based on synthetically produced solid resins that serve as carriers for sugar, sweeteners and flavourings.

For over 60 years now, Wacker Chemie has been a leading supplier of food-grade polyvinyl acetate solid resins, which the confectionery industry uses to make gum base. Together with finely ground sugar and concentrated flavourings, the gum base is kneaded into chewing gum at around 60°C. This gives the mixture a tough and tacky consistency, which is why it must be processed by powerful specialty machines. The choice of ingredients is limited. Water-based additives are not suitable, because they would dissolve the sugar out of the gum mixture. The disadvantage of fat-based ingredients is that they make the gum base extremely soft. This would cause the chewing gum to simply disintegrate in the mouth while being chewed instead of forming a homogeneous mass.

According to the Euromonitor market database, roughly 1000 kilotons of chewing gum were sold worldwide in 2015 alone. The same period saw sales of gumdrops, jelly and chewy candy that were more than double that quantity. This also includes soft candy, as flexible sugar bars are known in the industry, which is available in every flavour variation — from all kinds of fruit to milk and even soft chocolate centres. These are based on a melted sugar solution, which is boiled with glucose syrup at ca. 100 to 130°C.

Chewy candy thus has decisive advantages over chewing gum: it is produced in a continuous boiling process. Water- and fat-based ingredients such as milk, cream, honey, cocoa, nuts, vitamins and other flavourings, as well as colourings, can easily be added to the boiled sugar mixture. Since sugar dissolves in water, it is also very easy to clean the equipment. However, it also has a weak point: due to its sugar base, the calorie content is high.

With Wacker’s innovative CANDY2GUM technology, a multitude of water-based, fat-containing and natural ingredients are available that, until now, were unheard of for chewing gum — ranging from fruit juice, coffee and milk to caramel, chocolate, coconut and plant extracts. (Image credit: Wacker Chemie AG)

Chewing gum, on the other hand, provides a long-lasting chewing experience without giving you a guilty conscience — the calorie intake is considerably lower. In addition, the chewing of gum stimulates the formation of saliva, which increases the pH value in the mouth, neutralising the acids that attack tooth enamel. Alkaline saliva can also re-mineralise teeth. To prevent tooth decay, only sugar-free gum should be chewed, of course.

Wacker’s new CANDY2GUM technology combines the best of both worlds: the texture of chewing gum with the boiling options of chewy candy. “This opens up entirely new possibilities for integrating ingredients. This technology can be used to formulate unprecedented confectionery,” said Martin Seizl, business development manager at Wacker Biosolutions. Plus, CANDY2GUM makes for an entirely new mouthfeel — starting as a chewy candy and then turning into chewing gum after a short time in the mouth.

The secret of CANDY2GUM lies in its basic ingredient, Wacker’s pre-formulated CAPIVA C03 mixture. It is insoluble in water and melts fully, which means it can be blended uniformly. CAPIVA C03 is suitable for blending with both sugary and sugar-free candy mixtures, which opens up numerous opportunities for novel confectionery products.

Since CAPIVA C03 melts fully, manufacturers can use conventional candy boiling processes. “We are thus producing the first raw material worldwide that makes it possible to boil chewing gum-like candy and shape it as required instead of kneading it elaborately,” explained Thomas Wimmer, head of the chewing gum lab run by Wacker Biosolutions.

From lab to large-scale production

A chewing gum was successfully boiled for the first time in December 2013 at a Wacker food-technology laboratory in Burghausen. “We wanted to find out whether what we did in a cooking pot would also work on an industrial scale,” said Wimmer. That’s why the team got in contact with the confectionery machinery maker Chocotech in Wernigerode, Germany, in early 2014. “We were excited about the CANDY2GUM technology from the start, because it can be used to make a completely new type of candy. We wanted to find out whether the technology would work with conventional equipment,” said Volker Günnel, a qualified engineer and area sales manager at Chocotech.

Lab test: the secret behind this confectionery innovation is the production process — CANDY2GUM products are simply boiled. The premix is ideal for use in both sugary and sugar-free candy mixtures and thus opens up numerous opportunities for novel confectionery products. (Image credit: Wacker Chemie AG)

Chocotech equips well-known German and international confectionery manufacturers with machinery for producing hard and soft candy, fruit-flavoured jelly candy, caramel and whipped sugar mixtures. In industrial-scale production, candy manufacturers normally use continuous cookers that produce confectionery in a non-stop chain process. While the ingredients are weighed into the first pot in batches in accordance with the recipe, finished candy comes out at the end of the process in a continuous loop.

Chocotech tests showed that the CANDY2GUM technology can be used in a continuous boiling process, but some adjustments were required. For two years, Wacker food technicians refined the pre-formulated CAPIVA C03 mixture so that it could be used in industrial production. In addition, Chocotech engineers worked on adapting conventional production machinery and processes for the new technology. The engineers equipped a machine that usually produces hard candy with an additional melting container for CAPIVA C03, including pump and flow meter.

“The ready-to-use premix is melted in separate containers and only mixed with the sugar mixture and flavourings in one of the final production steps to minimise cleaning,” explained Günnel. At the end, the cooled mixture runs through a cut-and-wrap machine that cuts the candy into bite-sized pieces and packages them.

Because the production process of CANDY2GUM is similar to making chewy candy, standard sugar-confectionery cookers can be used. (Image credit: Chocotech GmbH)

Wacker started to present the new CANDY2GUM technology to various customers and partners in 2015. A market study that was commissioned by Wacker and involved 4000 participants worldwide shows that CANDY2GUM is also received well by end consumers. Regardless of where they were from, those surveyed found the integration of natural ingredients such as real fruit juice and vitamins particularly interesting.

In the USA, consumers are especially looking forward to chewing gum-like candy with real caramel. In China, the underlying idea got an impressive 70% approval rating, particularly because real milk or coconut milk could be added to the confectionery.

It is also remarkable that all age groups in China rate CANDY2GUM as highly promising. Seizl believes that this is due to growing health awareness: “CANDY2GUM offers an opportunity of adding fresh, natural flavouring ingredients such as milk or fruit juice to chewing gum. This is very popular with Chinese people of all ages.” A study by the German Federal Ministry of Food and Agriculture on the topic of “potential of German confectionery in China” shows that, when it comes to the consumption of sugar confectionery, the Chinese place particular importance not only on taste, but also on product innovations. In other words, Chinese consumers have a fondness for new, unusual food.

With retail sales of over US$15 billion, China is the second-biggest confectionery market in the world after the USA. The chewing-gum market, in particular, has been registering above-average growth for years. The focus is primarily on sugar-free products. Health is a key sales argument here. Natural ingredients obtained from fruit or plants are very popular with consumers, too.

“Nowadays, one in three people will give a critical glance over the list of ingredients before putting confectionery in their shopping cart,” explained Seizl. CANDY2GUM can furthermore be used to produce functional candy with health-promoting ingredients. The technology makes alternative product forms for active ingredients such as vitamin C possible.

“The new CANDY2GUM technology expands the multifaceted Wacker portfolio for the chewing gum and confectionery industry,” summarised Seizl. The first CANDY2GUM products are expected to be launched on the market during 2017, offering consumers worldwide an entirely new chewing experience.

Top image: With the innovative CANDY2GUM technology, it is now possible to produce confectionery goods that begin like a piece of chewy candy and turn into gum as they are being chewed — creating a completely new mouthfeel. (Image credit: Wacker Chemie AG)