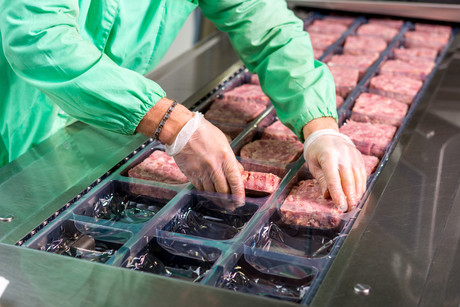 In 2018, the total value of the UK plant-based market was worth £443 million. With growing environmental and health concerns surrounding the impact of meat, the demand for meat-free produce is increasing. Here, Darcy Simonis, industry network leader for ABB’s food and beverage segment, discusses the rise of meatless products and how producers are keeping up with demand.

Meatless burgers, for instance, have been designed to look and taste like real meat. California plant-based company Beyond Meat launched a meatless burger made from vegetable proteins that tastes and ‘bleeds’ like real meat and, despite the suggestion that vegetarians and vegans are the primary target market, the company’s strategy is to, in fact, position its product to meat eaters to help change perception of meat-free products.

And the innovation doesn’t stop there. Other meat-free alternatives have been developed, including a zero waste mycoprotein using wheat and corn. The developed protein is made from zero waste fermentation, which converts starch into protein and is designed to look and taste like real meat. Additionally, some manufacturers are turning to cutting-edge technology to innovate the future of plant-based food.

Redefine Meat from Israel has developed 3D printed technology, which creates a realistic meatless product that recreates the experience of eating meat. The process of 3D printing is designed to replicate the textures and muscle structure associated with a steak.

Further developments in the production of meatless products could even see meat produced in a lab. Clean meat, or cultured meat, is meat that has been produced by replicating a sample of animal cells in a culture outside of the animal. As this method would require less livestock farming, it’s estimated that clean meat would lower greenhouse gas emissions by 96% and use 45% less energy than conventional meat.

The future of the meatless industry

For manufacturers across the plant-based industry, these developments could mean that manufacturers may need to adopt different production methods in order to remain competitive. It’s clear that plant-based products require ingredients with more complex properties than the ingredients used for meat-based products, meaning that the way they are processed in a plant will inevitably be different.

Traceability allows food manufacturers to track and record their produce through all stages of production, processing and distribution. ABB’s Manufacturing Operations Management (MOM) suite system can create a digital trace of an ingredient and logs the data into a central database for suppliers and manufacturers to refer to.

Meatless products will contain substitute ingredients to replicate them to real meat, such as binders and various proteins that may need storing and transporting at different temperatures. In-depth traceability will allow manufacturers to track every ingredient and ensure that everything has been stored and transported correctly and cross-contamination has not occurred at any stage.

As the impact of meat production on the environment and our health becomes a greater concern, the demand for meatless products is increasing. With more people making the decision to reduce their meat consumption, manufacturers are faced with the growing demand of supplying meatless alternatives that taste and look more like real meat. With progress in the market flourishing, customers will soon be left with the question of meat, or no meat?