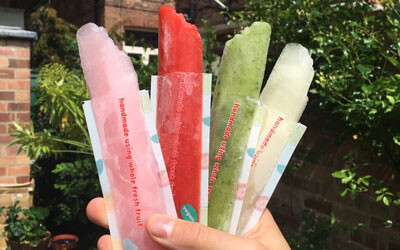 Food scientist from the University of Nottingham’s Food Innovation Centre are working on a cool idea for ice poles (lollies) entrepreneur Pola.

The company uses whole, fresh fruit to make ice poles, which are currently sold from a distinct and colourful cart, locally and at festivals and events. But Isaac Greenway-Tambini, who runs the business, has ambitions to supply further afield via mail order and has been working with the food scientists to create ambient versions of the lollies which can be popped into the freezer on delivery.

The food scientists plan to introduce in-pack thermal pasteurisation, which would make the lollies ‘ambient stable’, and are supporting Greenway-Tambini as he runs a number of tests and trials to ensure that the ambient lollies are as safe and of the same high quality as the frozen versions.

“I want to be able to produce products that are ambient, which would allow me to ship nationwide,” Greenway-Tambini explained. “They would in effect be pouches of liquid, packed with the same great taste, which could be frozen at home. It would be a huge advantage over ice lollies, which obviously have to stay frozen.”

Greenway-Tambini launched the business last year and is following in the footsteps of his great grandfather — an Italian immigrant who founded a chain of ice cream shops in Wales. His enterprise remains a family affair with his mum, June, growing some of the fruits and other ingredients he uses in the recipes and his 16-year-old brother, Angelo, helping with sales and deliveries.

Many of the ingredients used in Pola ice poles are home-grown or sourced from within a five-mile range, with the addition of some exotic flavours. Greenway-Tambini makes the icy treats from home, with a five-star hygiene rating, and varies his range according to the seasons. It currently includes strawberries and cream gelato, rose and lemon, raspberry and lime, elderflower, Alphonso mango gelato, coffee gelato, strawberry and lemon.

Greenway-Tambini is being supported under the Driving Research and Innovation project — a three-year project that runs until the end of January 2023 in the D2N2 area of Derby, Derbyshire, Nottingham and Nottinghamshire. Funded by the European Regional Development Fund (ERDF) and run by the Food Innovation Centre based at the University of Nottingham and in association with the Midlands Engine, it is a unique collaboration project that provides free specialist innovation support to small and medium-sized food and drink manufacturers.

“They have been really helpful at the Food Innovation Centre,” Greenway-Tambini added. “I’m now in the process of carrying out all the testing on the different flavours to work out the optimum temperature and times for each recipe to ensure that the end product is stable when ambient.”

The company now plans to purchase filling and packing equipment to semiautomate production and wants to make the product ambient stable for at least short periods of time to allow the company to sell and transport the product ambient, thus reducing the issues, expense and environmental impact associated with having a chill or frozen chain product.

The food scientists working at the Food Innovation Centre at the University of Nottingham’s Sutton Bonington campus are very pleased to be supporting Greenway-Tambini with their expertise, which will allow him to develop the business further.