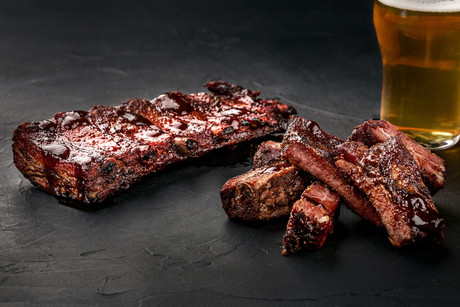 Bargara Brewing’s beers are made in Bundaberg, in Queensland. The beers are claimed to be brewed using only rainwater and high-quality ingredients.

“I’m sure our guests were transported to sunny Hervey Bay and the Great Barrier Reef when they sampled these beers,” Furner said.

In 2018, Borrowdale was recognised as having Australia’s best pork steak. The family-owned farm does not use moisture infusion in its meat, no added hormones, and it is certified free range. The pork is raised at Goondiwindi in southern Queensland.

“Borrowdale pork is carbon neutral, with the company offsetting all of its emissions and also supporting the Mytrah Wind project in India,” Furner said.

Launched by the North Australian Pastoral Company (NAPco) in July, the beef is catered to consumers seeking to reduce the environmental impact of their dietary choices. NAPco runs approximately 200,000 cattle on 6.1 million hectares in Queensland and the Northern Territory, and has reduced carbon emissions through the installation of solar, zero deforestation, reforestation, genetics, increased water efficiency and overall land management.

“The cattle aren’t fed any growth promotants, allowed to roam free on the grasslands of northern Queensland then finished at a feedlot on the Darling Downs. The end result, as these business leaders have found out tonight, is great-tasting beef that is also friendly to the environment,” Furner said.

In 2017–2018, Queensland exports of agriculture and food products to Singapore were valued at $326 million, underscoring Australia’s valuable trading relationship with Singapore.

“Tonight’s dinner is a way of showcasing the valuable trading relationship between Singapore and Queensland, and Singapore’s position as one of Queensland’s most important trading partners in South-east Asia,” Furner said.

Since the beginning of the pandemic, plant-based foods, dairy alternatives in particular, have...

Consumers on the lookout for "nutrient dense" products

Nutritional density, indicating high levels of nutritional content, has been pegged as an...

New research suggests that plant-based alternatives have increased in popularity at an astounding...