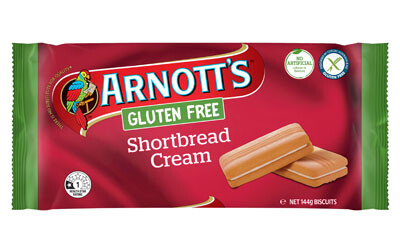 Arnott’s has marked International Coeliac Awareness Day — which occurs each year on 16 May to provide awareness of coeliac disease — by expanding its gluten-free product range.

Three new biscuit products are available on shelves right now as part of the Gluten Free range. Mint Slice, Shortbread Cream and TeeVee Snacks Original will now all be available for those who want or have to avoid gluten.

“After the overwhelmingly positive response to our Gluten Free product launch in 2021, we are thrilled to announce that the millions of consumers seeking out Gluten Free snacks will have three new Arnott’s favourites to indulge in,” said Ranita Cowled, Business Director, Treating at Arnott’s.

Coeliac disease is an autoimmune disease that makes the body unable to process gluten, a protein found in wheat, rye, oats and barley. According to Coelic Australia about one in 70 people have the disease, which results in damage to the small intestine if gluten is consumed.

Arnott’s Group nutritionist Alison Baldwin said the gluten-free products would provide much welcome variety for consumers who suffer from the disease, who otherwise might struggle to find products that cater to their requirements.

“Nearly 25% of Australians restrict gluten or wheat, and many of those people have traditionally felt disappointed by the available offering, with as many as two-thirds believing that the existing Gluten Free snacks don’t taste nearly as good as regular snacks, according to a study undertaken in-house.

The new products are currently available from Woolworths and independent grocery stores, and will be available in Coles supermarkets from 13 June.

New products bubble up for consumers

Despite its turbulence, 2021 had a strong showing for new food and beverage products, says a new...