Would you like some C. difficile with your lunch? 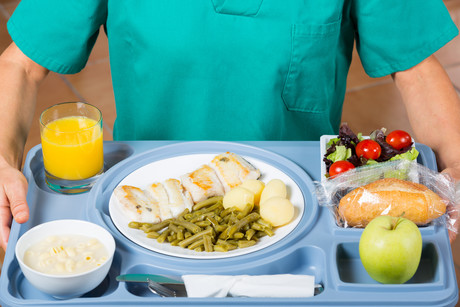 The gut infection causing bacterium Clostridium difficile (C. difficile) is resistant to many commonly used antibiotics and is particularly dangerous for hospitalised, elderly patients. The bacterium is known to be transmitted around hospitals but in recent research food has been suggested as a potential source of transmission.

The University of Oxford’s Dr David Eyre explained: “We know that C. difficile lives in the gut in a small proportion of healthy people, where it causes no symptoms. However, its resistance to antibiotics means it can grow uncontrollably in patients treated with the drugs, causing diarrhoea that can be severe or even fatal. It is the most frequent cause of infectious diarrhoea in hospitalised patients, and the increase in the use of antibiotics has allowed C. difficile to spread more effectively.

“Lots of effort has gone into controlling its spread including infection control interventions such as handwashing campaigns, and reducing the use of antibiotics that can lead to infection. Despite these measures, people are still getting C. difficile infections and the routes of transmission are not completely understood.”

Other sources of transmission that have been suggested include asymptomatic patients, children — who carry C. difficile more commonly than adults — and farm and domestic animals.

The new research included all the stool samples submitted on one day in summer and one day in winter in 2012/2013 from 482 European hospitals. Dr Eyre and his team selected the 10 most common types of C. difficile found in the samples. In each case, they used DNA fingerprinting to examine how widespread the type was within countries and between countries.

Dr Eyre told the congress: “We know that C. difficile infection can spread within hospitals. If this was the only route of transmission, we would expect to see each type of the bacteria concentrated within one area. However, because we also saw some types that were spread around several countries, this suggests the bacteria are moving around by other means.”

The research indicated that five of the types were clustered within countries while five others were not. One type, for example, was found in Bulgaria, the Czech Republic, Finland, France, Germany, Hungary, Italy, The Netherlands, Poland, Romania, Slovakia, Spain, Sweden and the UK.

Another type, which was spread around Austria, France, Germany, Greece, Ireland, Italy, Portugal, Spain and the UK, has previously been associated with pig farming.

Dr Eyre continued: “We don’t know much about how C. difficile might be spread in the food chain, but this research suggests it may be very widespread. If that turns out to be the case, then we need to focus on some new preventative strategies such as vaccination in humans once this is possible, or we might need to look at our use of animal fertilisers on crops.

“This study doesn’t give us any definitive answers, but it does suggest other factors are at play in the spread of C. difficile and more research is urgently needed to pin them down.”

To investigate further, Dr Eyre hopes to repeat the study but, at the same time, obtain samples from food, the wider environment and hospitals, to better understand where the source of infection might be.

Prof Roger Pickup, Professor of Environment and Human Health at Lancaster University, said: “This is an interesting study with a certain predictability. The spread of pathogens and their possible antimicrobial resistance is well documented particularly where person to person is the significant mode of transmission. However, it is being increasingly recognised that other transmission routes could be significant for some pathogens.

“Food contamination and the prevalence of zoonotic diseases in animal hosts amplified by cycling through environmental contamination is increasingly being recognised as significant for the spread of disease. Where there is little information of global spread, such as C. difficile, then more research is needed.

“Should we be worried by our food?  ‘Yes’ — but correct cooking, storage and of course secure supply from uncontaminated sources are important considerations we make to maintain our own health in an increasingly microbially contaminated world.”

The research was presented at the 27th European Congress of Clinical Microbiology and Infectious Diseases.