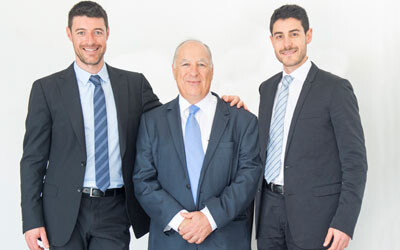 Jet Technologies is celebrating 40 years of service in the industrial printing and packaging industries.

The Australian family owned and operated business has a long history as a specialist importer and distributor of printing and packaging products both in Australia and globally.

The story of Jet Technologies began when Managing Director Albert Malki and his family made their journey from Italy to Australia back in 1980. When Albert and his family immigrated to Australia, hardly able to speak English, the landscape was vastly different, with difficulties faced in assimilating into the Australian culture. With this obstacle in mind, Albert decided to start a company called Jet Overseas Trade to facilitate trade of a varied range of products between Australia and Europe. Industrial products were added over the years, including surfactants and aluminium. By the late 1980s, Amcor requested the assistance of Jet Overseas Trade in working with the Cerutti Group, an Italian manufacturer of gravure printing presses, and from there grew the print division of the company.

“We pride ourselves on our strong family-based values, which we translate to our staff and our culture; investing in our staff to build long-lasting relationships with our customers, and striving to deliver genuine and expert service always,” said Albert Malki.

Working initially from offices in Sydney’s Bondi Junction, the team quickly expanded, and in 2001 moved to a larger location in Alexandria and became Jet Technologies. With further growth, including the addition of new team members in South Australia, Victoria and New Zealand, Jet Technologies moved to even larger locations with warehouses in Mascot and then its current headquarters in Rosebery. The Rosebery site features a state-of-the-art demo centre and a purpose-built ink management facility.

The company now also has a state-of-the-art office warehouse in Melbourne and employs over 70 staff, operating from locations across Australia, New Zealand, Indonesia and Singapore.

Nestlé has announced it is increasing the use of recycled materials across its...

Papyrus Australia has recently completed a proof-of-concept trial which has demonstrated the...

Cadbury to transition to recycled packaging